A nanoscale glimpse at the politics of beetle wings.

Beetles are the most widely varying form of life on earth, and definitely has its fair share of them. There are more than 10,000 different beetle species in , so it would be very hard to choose the yokozuna of Japanese beetles, but if we narrowed the competition down to the beetle with the most dazzling colours, this beetle would take out top prize. 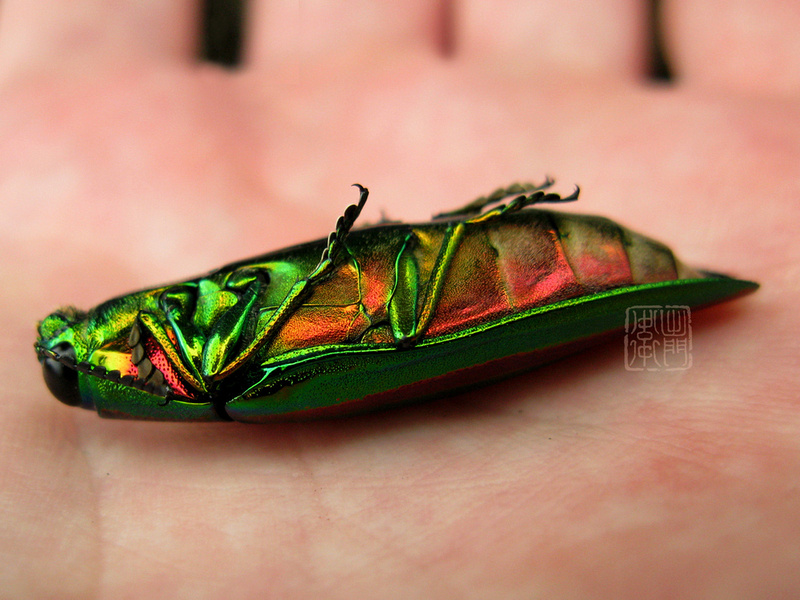 This is a Japanese Jewel Beetle. About 3-4cm in length, they are completely covered in metallic rainbow colours. Every single body part except their eyes glows green, purple, red, orange or blue, and the colours change depending on the angle you look at them from. 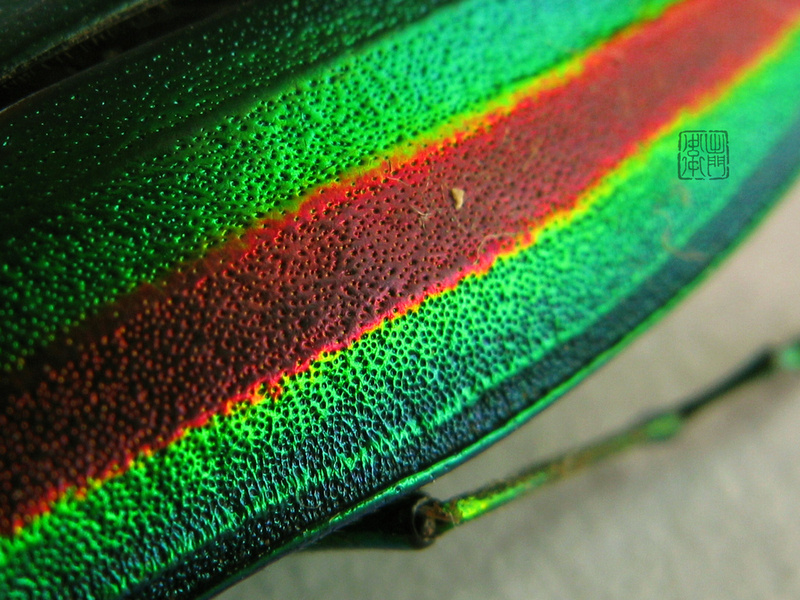 The Japanese name, Tamamushi タマムシ, means “ a beautiful insect”. Jewel beetles are harmless docile insects, and although common in Japan, are not so easy to find. Like most beetles, they emerge in the hot summer months, and spend most of their time buzzing around the tree tops of woodlands and parks looking for a mate. 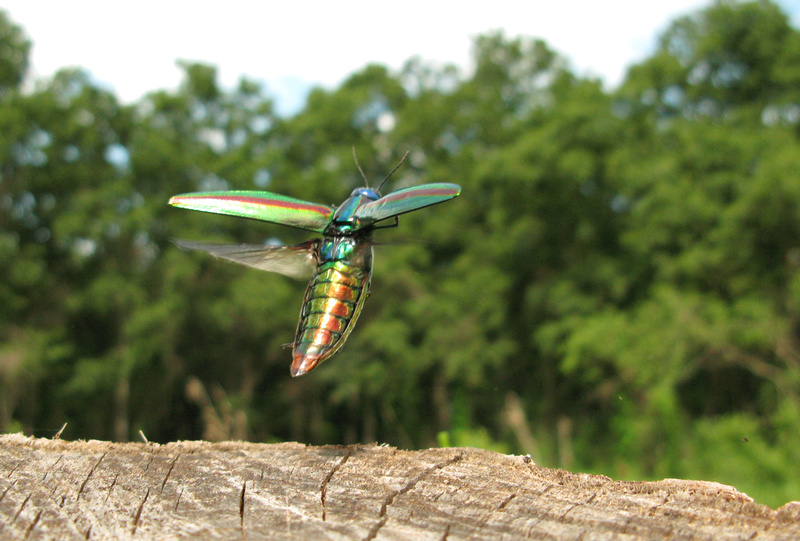 They have long been admired here in Japan for their beauty, and legend has it that if you put the wings of a jewel beetle in your kimono drawer, you will get rich and be able to afford to buy more kimono. Similar to how westerner’s keep a rabbit’s foot or a four-leaf clover as a good luck charm I guess. 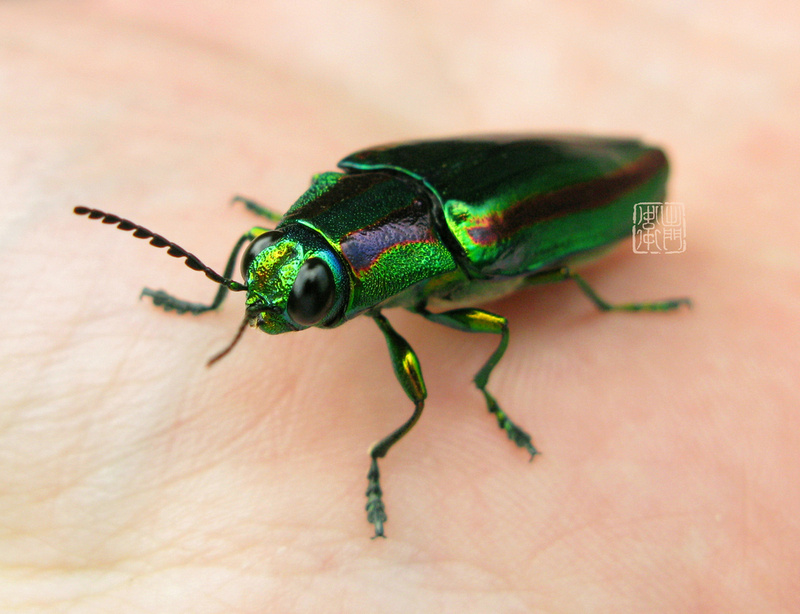 A few years ago, the Japanese jewel beetle made its way into science journals around the world, as it was the subject of an interesting scientific discovery about how beetle elytra (wings) reflect light. It was long thought that beetles have pigment on their wings that is covered in a transparent gloss, similar to how we apply paint to a car. But by analyzing Japanese beetle wings on a nano-scale level (Yes, nano scale. A billionth of a metre!), scientists discovered that light hits the surface of the beetle elytra and reflects back in many different colours. The colour we see changes depending on the light angle, and because there is no pigment, the colour never fades even after the beetles die or get wet. This would explain why jewel beetle wings were kept as lucky charms, rather than flowers or fruit or dead peacocks. They were also probably quite easy to find too. In my local woodlands, I often come across dead jewel beetles at the end of the summer.

This beetle-specific item of science news was quickly picked up by the Japanese media, and not just because of the Japanese obsession with beetles (Japanese are beetle mad, from rhinoceros-beetle fights to stag-beetle cartoon characters). The media jumped onto it because it gave them endless opportunities to drop puns about 'Tamamushi-iro'. Tamamushi-iro, literally “like the colours of a jewel beetle”, is a poetic Japanese expression used to describe a statement that can be interpreted in many different ways. The word has long been a favorite among newspaper reporters when describing the convoluted rubbish that politicians talk, that can be read in a million ways, just like the colours of jewel beetle elytra. And for a short time, the beautiful Japanese jewel beetle became a super star, splashed all over magazine covers while reporters raced to tell us how science had discovered the true reason why politicians couldn’t talk straight. It could all be explained by the way light rays were reflected. 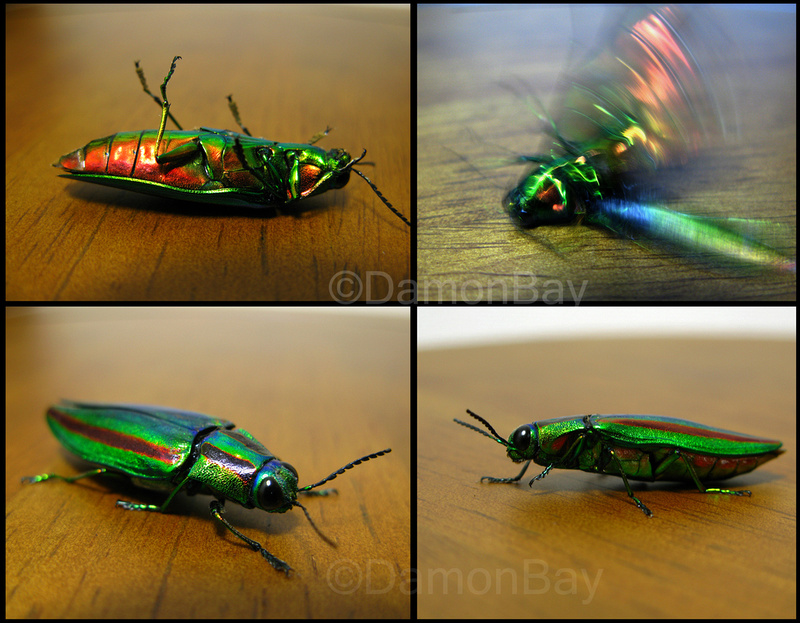 Colours of the Jewel Beetle

After a few months, the spotlight dimmed, and jewel beetles stepped back into the ‘coleoptera’ chapter of insect encyclopedias. Jewel beetles have a much more important place in Japanese history text books than just good luck charms and nano-politics though. Any studious young historian will trip over themselves to tell you about the famous ‘Jewel Beetle Shrine’ of Horyuji, in Nara. This 2 metre high 7th century Buddhist wooded treasure was decorated with jewel beetle wings that were collected and glued onto the outside, so that the shrine gave off iridescent rainbow colours. 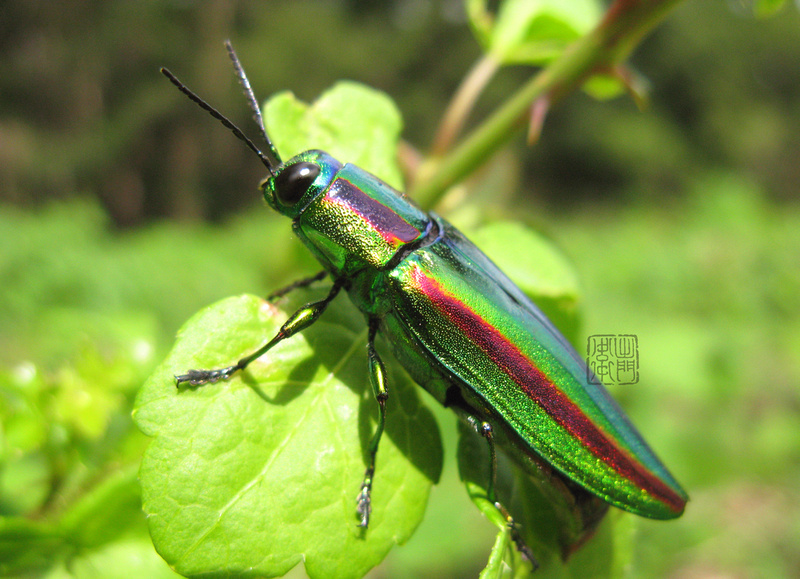 The correct Japanese name for this species is actually Yamato-Tamamushi (ヤマトタマムシ Japanese Jewel Beetle or Yamato Jewel Beetle), but most people just call it Tamamushi, because it is the type species (representative) of the whole family, just like how we call an ‘English Oak’ an oak tree. This naming system is common in Japan because the common names were around long before animals were classified. It’s scientific name is Chrysochroa fulgidissima. Japanese jewel beetles are part of the Jewel beetle family (タマムシ科). In Japan alone there are about 200 species. The Japanese Jewel beetle is by far the most well known, but my favourite is the Ubatamamushi (ウバタマムシChalcophora japonica). They don’t have an official English name, and at first glance are dull looking beetles, especially when compared to the Japanese jewel beetle. But when viewed closely, Ubatamamushi appear to be covered in gold dust (see below). This blog post is getting pretty long, so I'll write about some of the other jewel beetle species another day, with some photos of the interesting way in which jewel beetles lay eggs.
I hope you enjoyed a look into the life of Japan's most colourful but unknown beetle. If you enjoyed this article, please share and click the blog-ranking button below for me. 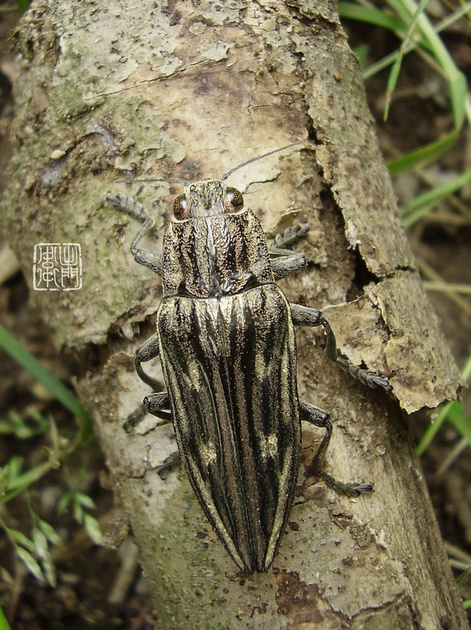