Flowers of the Dead

In late September, the first autumn colour splashes the hillsides here in  Chiba where I live.
No, not the yellows and oranges of autumn maples.
Not the browns and golds of the acorns and dried grass,
or the purples and blues of the akebi fruits or wild berries.
All those colours are still a few months away here in Southern Kanto.
The first autumn colour to appear here in Chiba,
is the dark red of the Spider Lily. 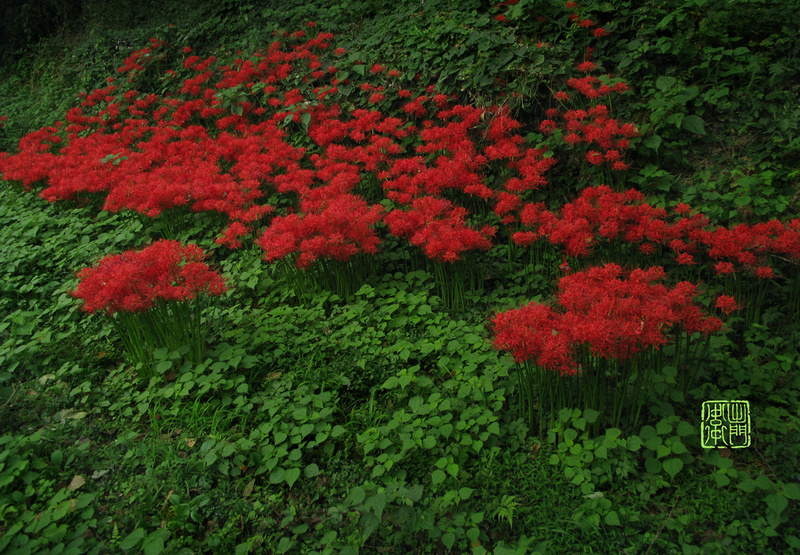 Spider Lilies, called Higanabana ヒガンバナ in Japanese, are perennial bulbs that lay dormant in the ground over the summer. In early autumn, the bulbs come to life and the fist sized flowers erupt in bright red clusters along roadsides, rice paddy edges and in graveyards and shrines. 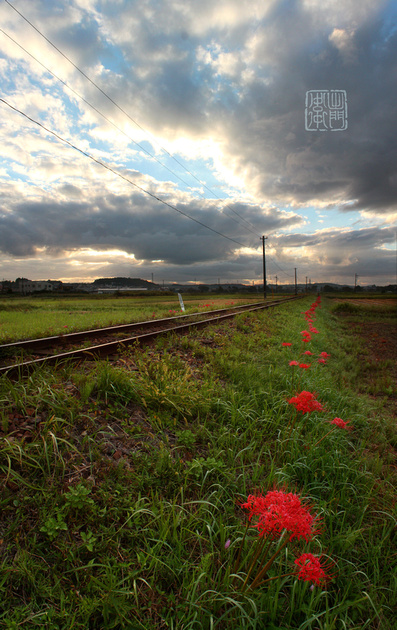 The flowers stay open for a few weeks, and as the petals drop off, the green leaves break through the ground, standing proudly through the winter while most other plants are sleeping. 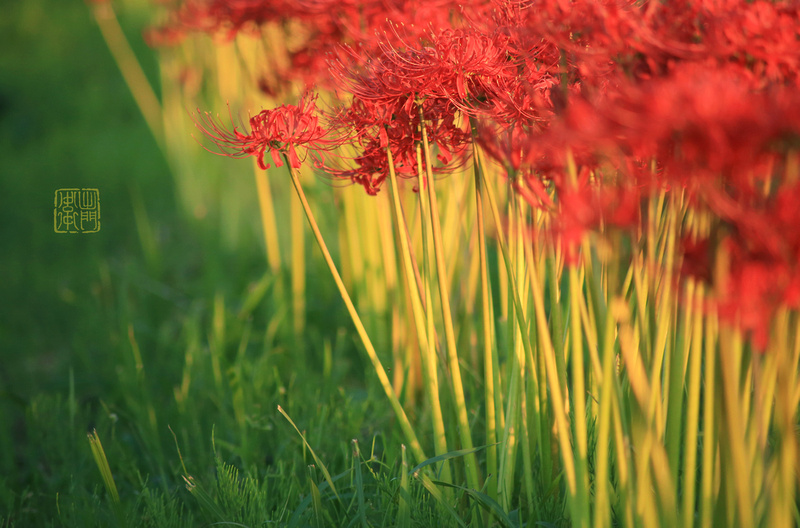 Higanbana flowers are common countryside flowers all over Japan. Pictures of them evoke images of autumn. They appear frequently in Japanese culture and mythology, and the name is familiar to most Japanese.
But interestingly, they are not actually native to Japan. They were brought here from China centuries ago, probably along with rice farming culture. 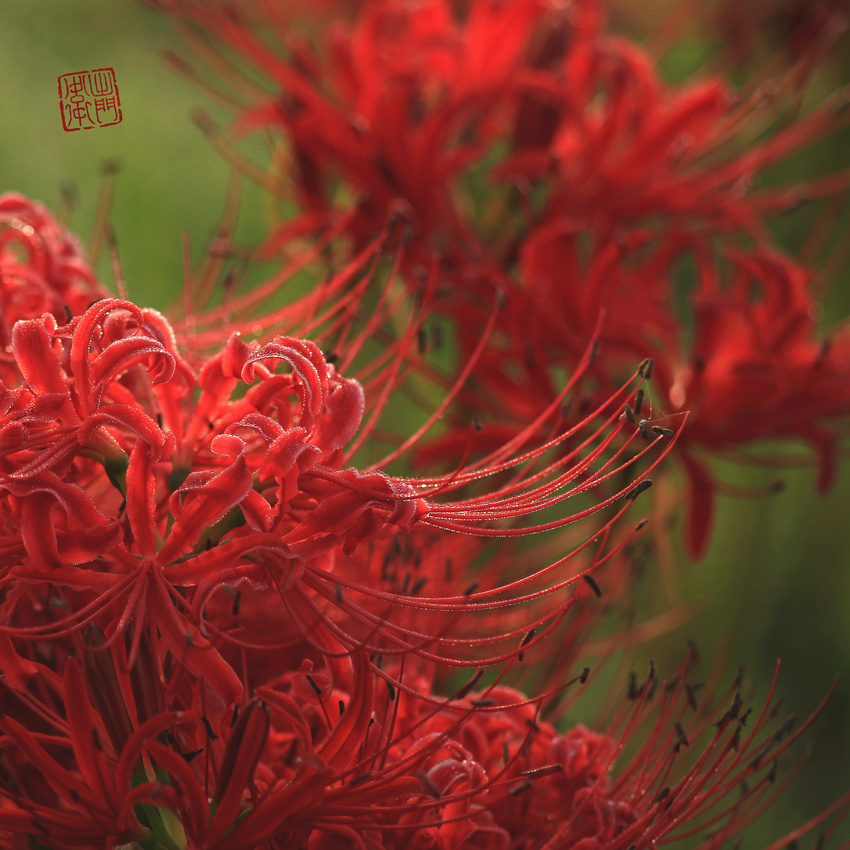 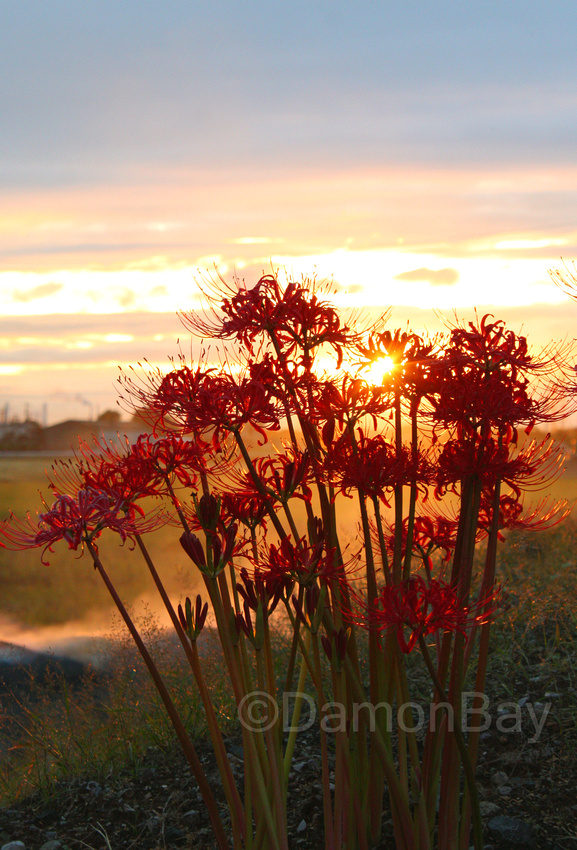 Spider lillies and a bonfire Flickrhanko

Glowing-red Spider Lilies at the edge of a rice paddy,
while rice husks smolder in the background.
The word "Higan" in the flower's name refers to a buddhist holiday celebrated around the autumn equinox called the autumn higan. Across most of Japan, Higanabana flowers bloom during that holiday, but here in Chiba where it is warmer, they usually flower about a week or two later. 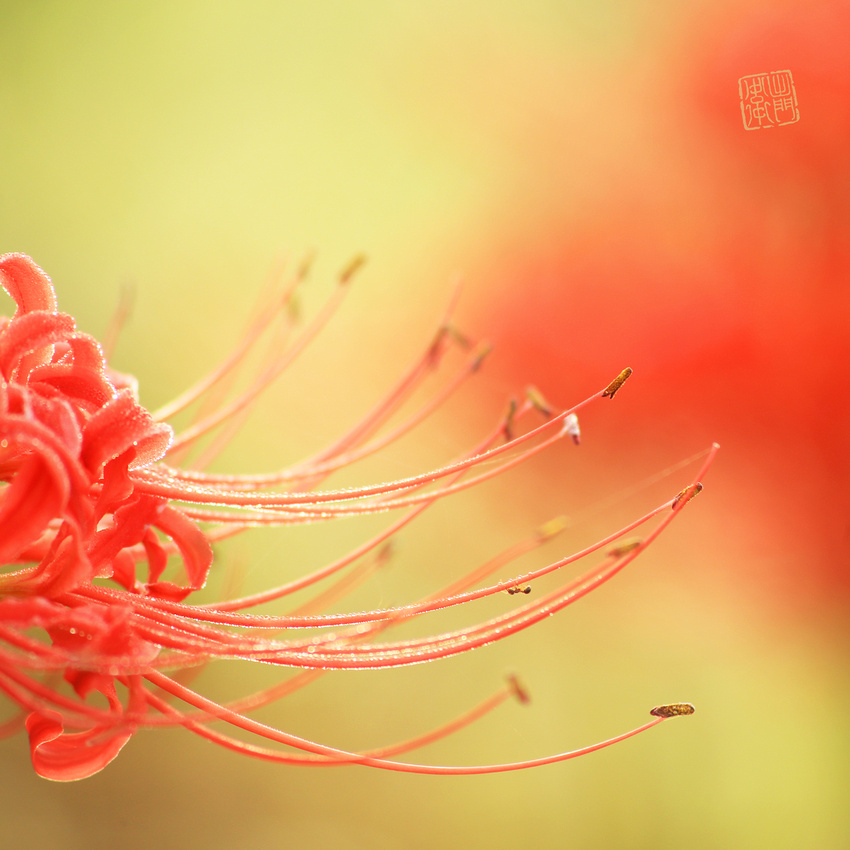 A tiny ant travelling along a spider lily filament. 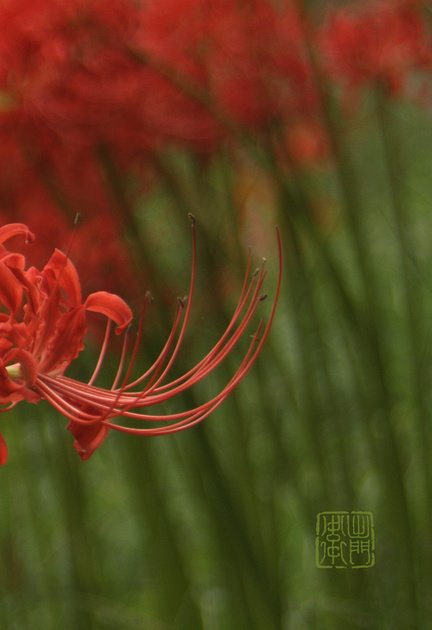 A close up of Spider lily stamen
It is not known why Higan flowers were brought to Japan, there are several interesting theories. They may have been traded as an ornamental flower, but the fact that they are most common around graveyards and shrines, indicates that there was probably a more symbolic meaning. 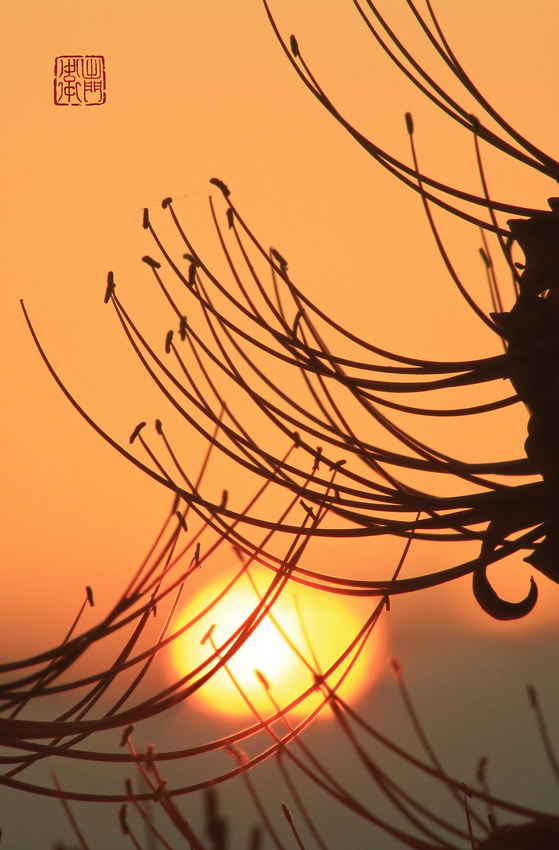 Were Spider lilies brought to Japan for a more deeper meaning?
It may have been something to do with the Higan festivals, as the bloom around that time. Or they may have originally had some kind of meaning associated with death. In fact, even today, alternative names for them do exist that suggest something more meaningful, like ユウレイバナ yurei-bana (ghosts flower) and シビトバナ shibito-bana (flower of the dead). Another hint towards this theory is lack of spider lilies in flower shops. They are almost never used as decorative flower cuttings.
The similarity between the flower's colour and that of Japanese shinto shrine gates may be just a coincidence, but the placement of the flowers in some places does also seem to suggest something deeper. 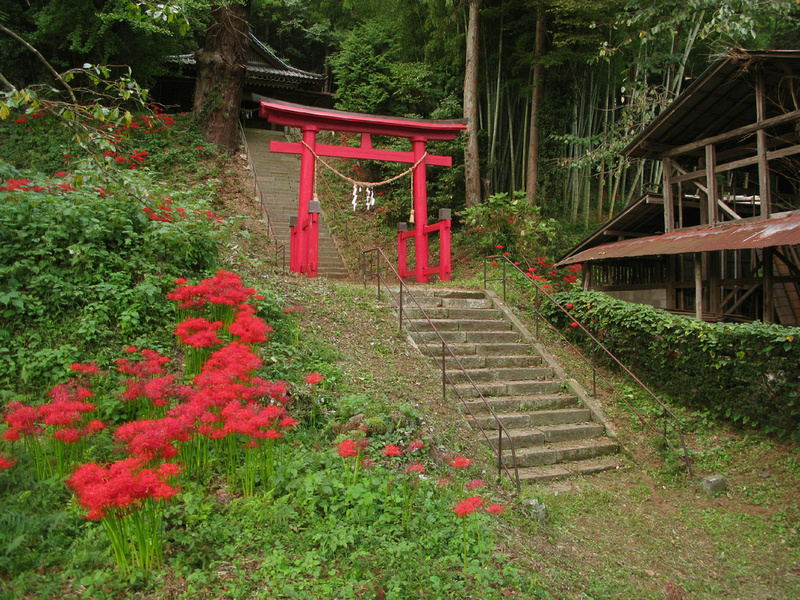 A more interesting theory exists though, one which is my favourite of the bunch!
Spider lily bulbs contain a chemical that is highly toxic to people and animals. So some people think they they may have been planted around graveyards and shrines to keep moles and shrews away. 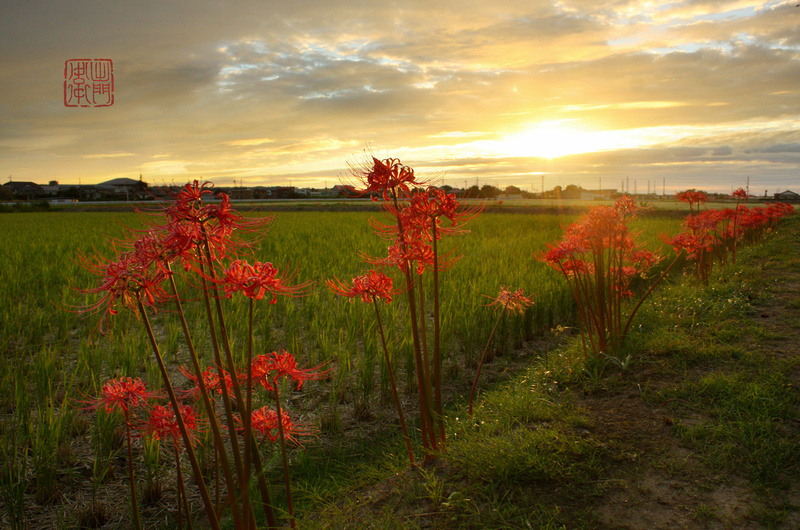 Planted along the edge of a rice paddy.
Moles and shrews dig large networks of tunnels and holes that can cause grave stones and shrine gates to lean or even topple, and planting spider lily bulbs may have been a way of keeping away these unwanted pests.
As I mentioned above, spider lilies are also commonly planted along the edges of rice paddies were erosion from moles can cause huge problems, especially in Spring when the paddies are flooded with water to help regulate temperature of the young rice plants. A small hole in the dike wall can let all the water out. 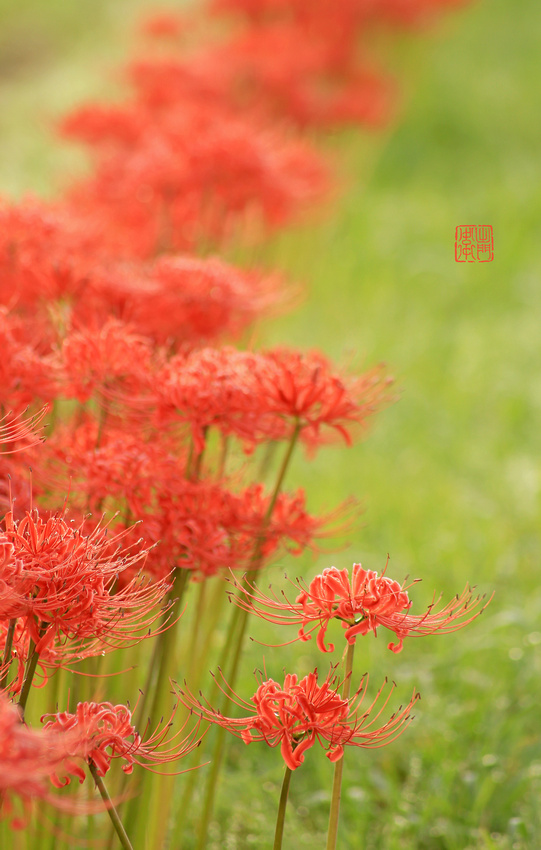 In USA, they are known by the interesting name Hurricane-Lilies, because they bloom during the hurricane season, and especially after heavy rains. They are popular ornamental flowers in Europe too.

Maybe I should plant some higanbana beside my potatoes,
because the moles sure make a mess of them.