There have been some fun photos going around facebook this last year with the “black-and-white challenge” hashtag. I was too busy (disorganized?) at the time to take part, but a few weeks ago I found some time to pick out some of my own Black & White favourites and will share them one at a time over the next few weeks.
Thanks for the original nomination Shu, sorry it took me so long to accept! 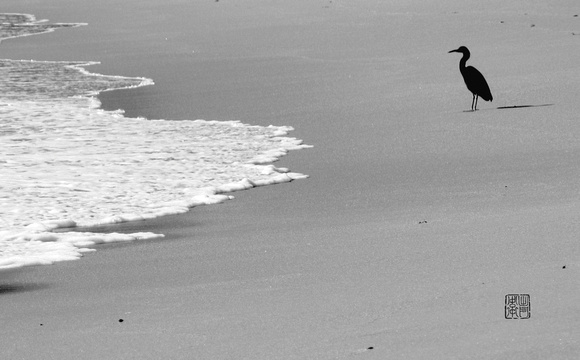 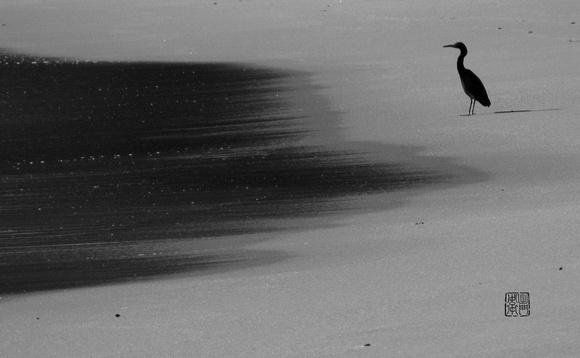 My first upload is a Diptych (a set of two photos) of a single Pacific Reef heron, both taken seconds apart. These photos are self-explanatory, especially for anyone who has spent time watching waves on a coarse sand beach, but just in case the photo does not immediately make sense I will explain.

It was mid winter, and a heron was catching small fish from the waves that lapped up and down on this dark sand beach. When the waves crashed and washed up the steep sandy beach, they were foamy and white. But when they receded the wet sand briefly remained dark, a complete contrast to the colour a few seconds beforehand.

Reef Herons (called Kurosagi クロサギ in Japanese) are unique amongst the herons found in Japan in that they are a coastal species. They come in both black and white plumage, but black is most common. Asides from their colour, they can be distinguished from other herons by their body shape. Reef herons are short and stocky, perfect for negotiating rocky shores where smashing waves and strong winds are the norm.

There are 7 common species of heron in Japan, 5 of them can all be seen in this photo. Great Egret, Grey Heron, Intermediate Egret, Little Egret, and Cattle Egret. 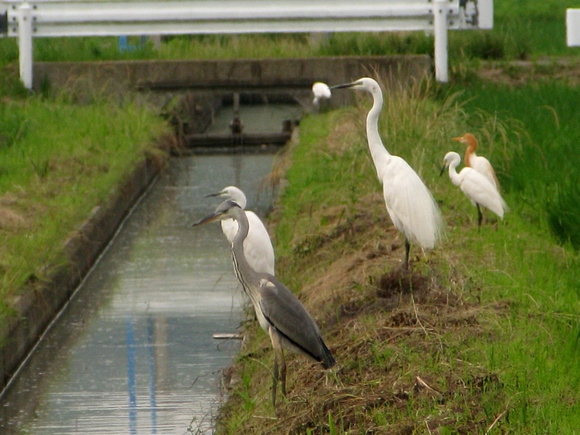 Grey herons are big and easily recognised by their colour. They can be seen all year round.

Great, Intermediate and Little Egrets are white, and are familiar to most Japanese who refer to them collectively as just Shirasagi シラサギ meaning “white heron”. Many people do not in fact realise that there are 3 different species though, and that they fill different niches in the ecosystem. The little egret (kosagi コサギ) can be told apart from the other by its yellow feet which look like socks. It’s complicated but as a general rule Great and Little Egrets are resident (in Japan all year) and Intermediate Egrets are summer breeders (fly south for the winter).

Cattle Egrets (also summer breeders) are rusty orange in breeding season, but in the winter they become white. At the end of the summer before they migrate south, they can easily be mistaken for white herons.

There is one more common heron, the easily recognized Black Crowned Night Heron (goi sagi ゴイサギ). They are nocturnal of course and can also be seen year round. Night herons don’t have long skinny necks so look completely different to the other herons but are the cause of some confusion because the young birds are motley brown.
Here is a young night heron, one of my personal favourite bird photos. 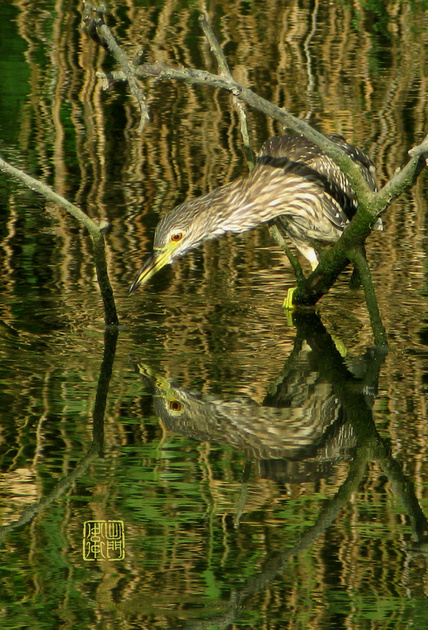 Thank you for reading my blog and viewing my photos.

Your support motivates me to keep taking photos.
My blog is registered to a ranking website, clicking this vote button regularly gives me votes and helps me get noticed. Please give it a click each time you come here. Arigatou!