Here is a new but old photo. It's new, because I have never shown it to anyone.
But old because it is one which I took last year.
今年もオオヨシキリの写真をチャレンジしていますが、中々去年みたいにうまく撮れないです。
なので、去年アップしなかったオオヨシキリの写真とビデオをご紹介します。 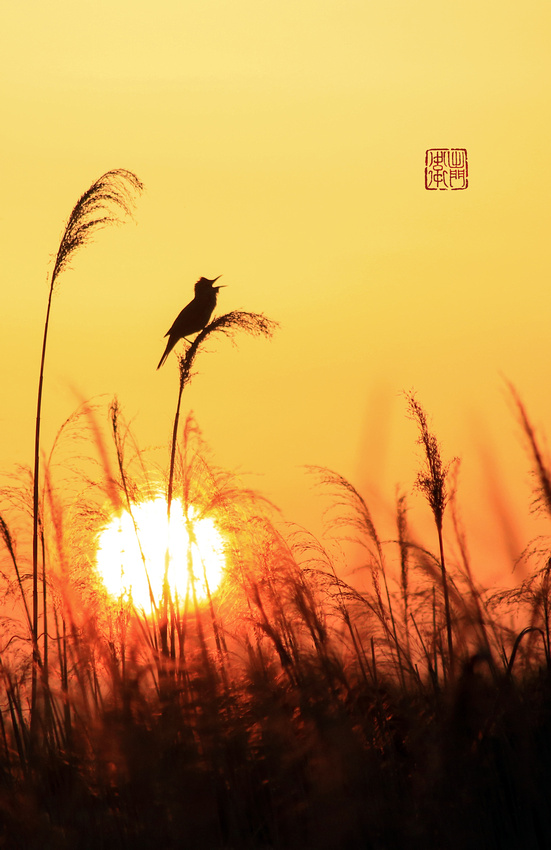 The bird is an Oriental reed warbler. called Ooyoshikiri in Japanese, these birds come to Japan to breed in summer, arriving around the beginning of May in my area. For a month after they arrive, the male birds spend most of the day, and sometimes nights too, perched at the top of a tall reed, announcing loudly that they are the boss of their claimed territory. Their territories are quite small, at any given time, you can see several males spread out over a reed bed, each claiming their home just a few dozen metres away from each other. Other males challenge them, by climbing up to the top of a reed close by and calling just as loudly. They edge closer and closer, trying to expand their own territory, until they get too close and are eventually chased away by the stronger. This goes on non stop through the month of May, until each of the boss reed warblers has established his section of the reed bed, usually in the middle where it is lush and also safe from stoats and snakes. The younger or weaker reed warblers end up with small territories, at the perimetres of the reed beds of course, or sometimes even out in the bare open where there are only a few tiny reeds growing.  Come June, the female reed warblers who have been watching the males from within the reeds, choose their favourite, knowing that the loudest and strongest males will be owners of the safest and most productive sections of the reed beds, the best place to bring up their young. Each boss will mate with several different females, each of which will build a nest and lay 4-6 eggs within the bosses section of the reed beds. Just like pheasants, the male reed warblers don't help out with raising the chicks, they just spend the summer patrolling their territory and watching out for snakes or other males.

The singing, or squawking as it is sometimes described, is an instantly recognisable sound to anyone who is familiar with the Japanese lowland countryside. Like the sight of the cherry blossoms in spring, or the smell of the cut rice in autumn, the sound of the reed warblers is one of the most vivid seasonal signs of the year, indicating the start of summer. For me, reed warblers evoke pleasant thoughts of evening strolls in the countryside. At this time of year the evenings are longest and the mild temperatures make sunset a great time to be out walking in the rice paddies, watching the sunset and of course listening to the reed warblers.

Here is a short video of a reed warbler singing a few weeks ago. It is very small, perched at the top of a reed on the left hand side of the video you can see how far away the birds are when I took the above photo.

This year, I wanted to capture some similar photos of reed warblers silhouetted on sunsets, but I haven't been having much luck.
For the last few weekends, I have been walking down to the reed beds near my house in the evenings, the same location where I took the photos last year. The birds have been there every night, and the sun is typical for early summer, turning into a bright ball as it sets through the humid skies in the west.
But the wind hasn't been cooperating, and I haven't been able to keep the bird in the frame as the wind makes the reeds wave all over the place. I will keep trying though, I have a few weekends left until the warblers stop singing. In the meantime, here is another image from last year. You may have seen this one before.

Thank you for reading my blog and viewing my photos.

Your support motivates me to keep sharing my photos.
My blog is registered to a ranking website, clicking this vote button regularly gives me votes and helps me get noticed. Please give it a click each time you come here. Arigatou!