Photo-Bombed by a Mantis 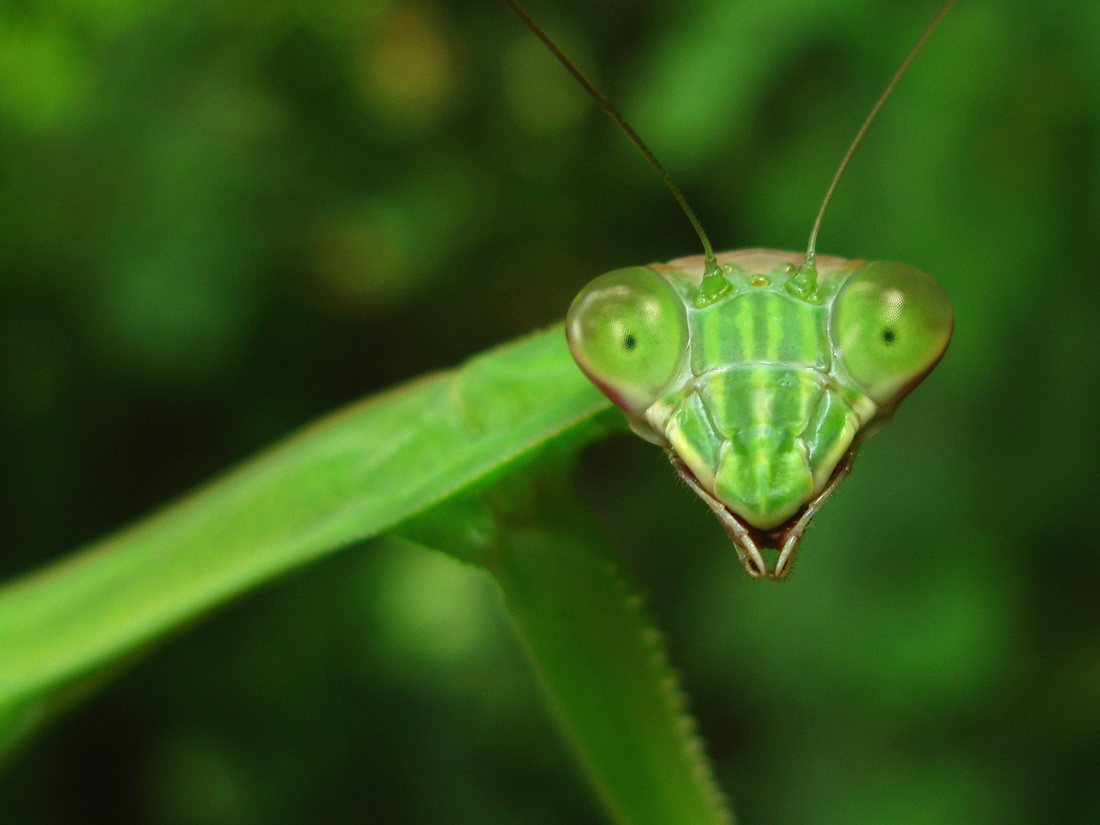 Meet the Japanese Giant-Mantis, the photo-bomber of the insect world.

Giant mantises, called ookamakiri in Japanese, are common summer insects in Japan, well known to most people, and a favourite among Japanese children. They are well camouflaged, so go mostly unnoticed, but are notorious for photo bombing, and have a sly way of doing it.

Many people don’t know it but mantises are good flyers. Here in Japan, where they are common, they can often be seen flying around. When I’m out exploring the countryside they’ll sometimes land on my car bonnet as I’m driving along one of the narrow lanes between rice fields, or jump onto my straw hat as I walk past a tree. They are big insects, a large female ookamakiri can be 10cm long, and one flying past will make most people jump, but they are harmless, and will only attack you if you handle them roughly. They don’t mean to land on you, and in fact they usually don’t fly long distances. In the summer, they fly from shrub to shrub in search of a good hunting spot, and in late autumn they move around a lot more as they look for a mate.

Sometimes though, I swear they come looking for me with the sole intention of photo bombing. It usually happens in high summer, a time when I spend most of my weekends out exploring the rice field valleys, when the Japanese Satoyama-countryside is at its most picturesque. Blue skies, dark green oak covered hills, and narrow valleys jam packed with rice paddies centuries old. It looks like this:

I usually have the rice-paddy valleys all to myself, the farmers do their work in the early morning and late afternoon, it’s far too hot for farm work in the middle of the day here. It’s noisy though, deafening. A BGM of cicadas, crickets, frogs and wind rustled rice plants. When I come across some beautiful rice fields worthy of a few landscape shots, I take some time to get a good photo, which seems to be just long enough for a giant mantis to prepare! I walk around for a while choosing the best angle for a landscape shot, then spend a few minutes setting up the camera and tripod. I’m too busy to notice the mantis landing on my tripod, and as I look through the eyepiece, line everything up, screw on a filter and tweak the settings, the giant mantis climbs up around the front of the camera and sits quietly waiting for the right moment to photo-bomb me.

I’m ready to go now. All I have to do is wait for the clouds to move into position.

I step back from the camera and grab a drink as I watch the blinding white clouds rolling past.

After a few minutes, the clouds roll into place. Meanwhile, around the front of the camera where I can’t see, the mantis is now staring into the lens of my camera.

I step forward and turn the LCD screen...

There’s a giant mantis staring right at me ! 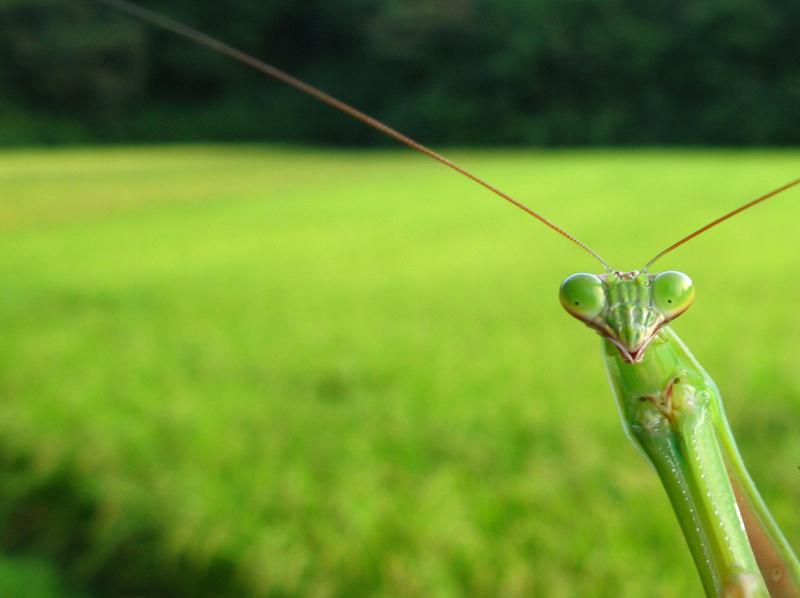 Photo-Bombed by a Mantis

Now I don’t know what it is about camera lenses that attract giant mantises, maybe they can see something inside the camera that looks edible, but it sure is comical when they sneak up on me like this.

I’ve had them bomb me from the bottom: 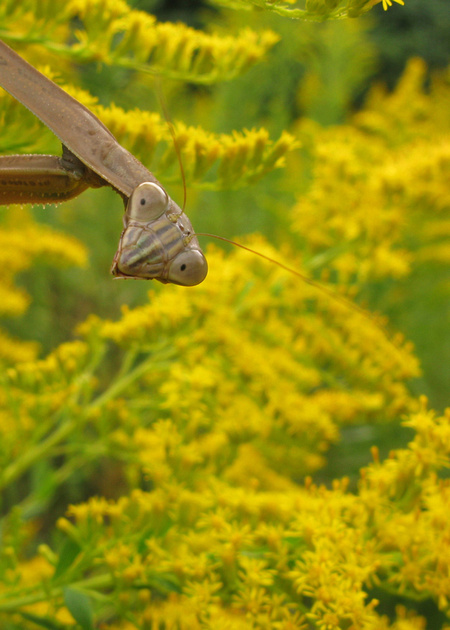 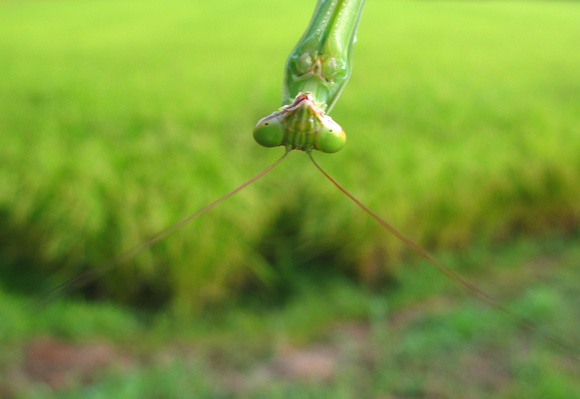 I’ve even had one photo bomb my spider photo: 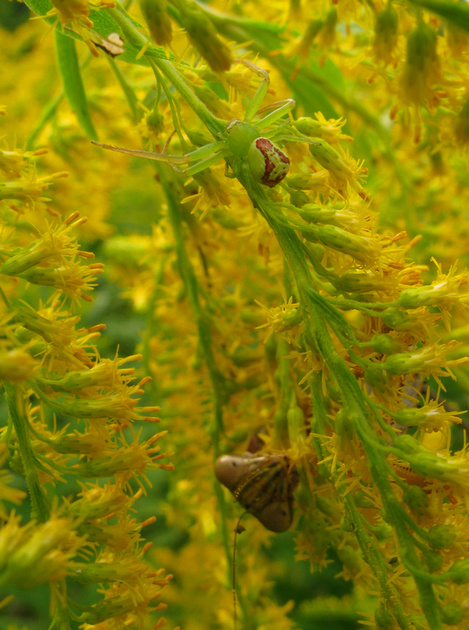 About to get a taste of his own medicine

Although sometimes comical, Giant-Mantisis are beautiful insects, and their size make them a great subject to start learning about Japanese insects. They are not the only species of Mantis seen in Japan, but they are the most common, and certainly the most visible. The Japanese word for mantis is kamakiri カマキリ, and the oo in ookamakiri means giant or large. Most people just call them kamakiri though, and are unaware that there are several different species. Kama is the Japanese word for sickle or scythe, and kiri means to cut or chop. 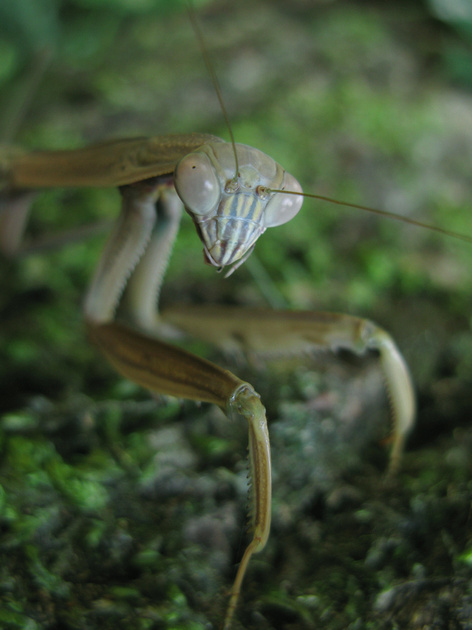 One of my favourite mantis photos, this one is called “A slightly nefarious streak”.

Giant-Mantises can be green or brown, depending on the environment they chose to hunt in. They have a simple life cycle, as opposed to beetles, butterflies, bees and flies which go through different stages (complete metamorphosis). In late spring, about 150-200 young mantises (nymphs), emerge from an egg case already with legs and sickles. They catch and eat other small insects and molt skins numerous times over the summer, slowly growing bigger each time. In autumn they go through a final molt and grow wings (adults) and sexual organs. They mate, lay eggs and die off as Jack Frost arrives. The egg cases stay dormant over the winter, and when the spring arrives the young mantises inside start growing. Mantises in most of Japan live for about 6-7 months. Here in Chiba where it’s warmer, they can live well into late December (winter) if they find a sunny South facing hillside, and I’ve seen them in early April.

They make great pets for children, who love watching them hunt and devour! Organic minded gardeners like myself deliberately place unhatched egg cases among their vegetables to make free use of the mantis' incredibly stealth hunting skills. The mantis' anthropomorphic facial expressions make their photo-bombing look intentional, but can be easily explained. Mantises have excellent eyesight and will sit motionless waiting for a scrumptious meal to wander within striking range. They can even hunt at night. They hunt by ambush, rather than chasing and hunting down prey.  When they sense any movement, they stay still and turn only their heads, then stare intensely at the target waiting for more movement. If it keeps moving they know it’s prey and will slowly move towards it. If it stops moving they will loose sight of it. 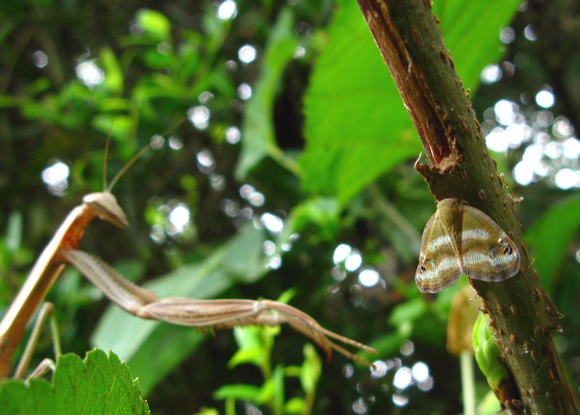 A Giant-Mantis hunting a true-bug. After I took this photo, the bug stopped moving and the mantis actually lost interest in it and gave up the hunt.

In English speaking countries, mantisis are usually known as a Pray-Mantis, or a Praying-Mantis, this name comes from their tendency to hold their arms up like a praying person. Interestingly, their alternative but not so well known Japanese name is ogamimushi オガミムシ, literally praying-insect.

So finally, a proper photo of a Japanese Giant-Mantis.

After getting so many unintentional mantis photos, last year I took my camera out to get some proper photos of a mantis.

This was in late Autumn on a cold day when the mantis didn’t have much energy to move. 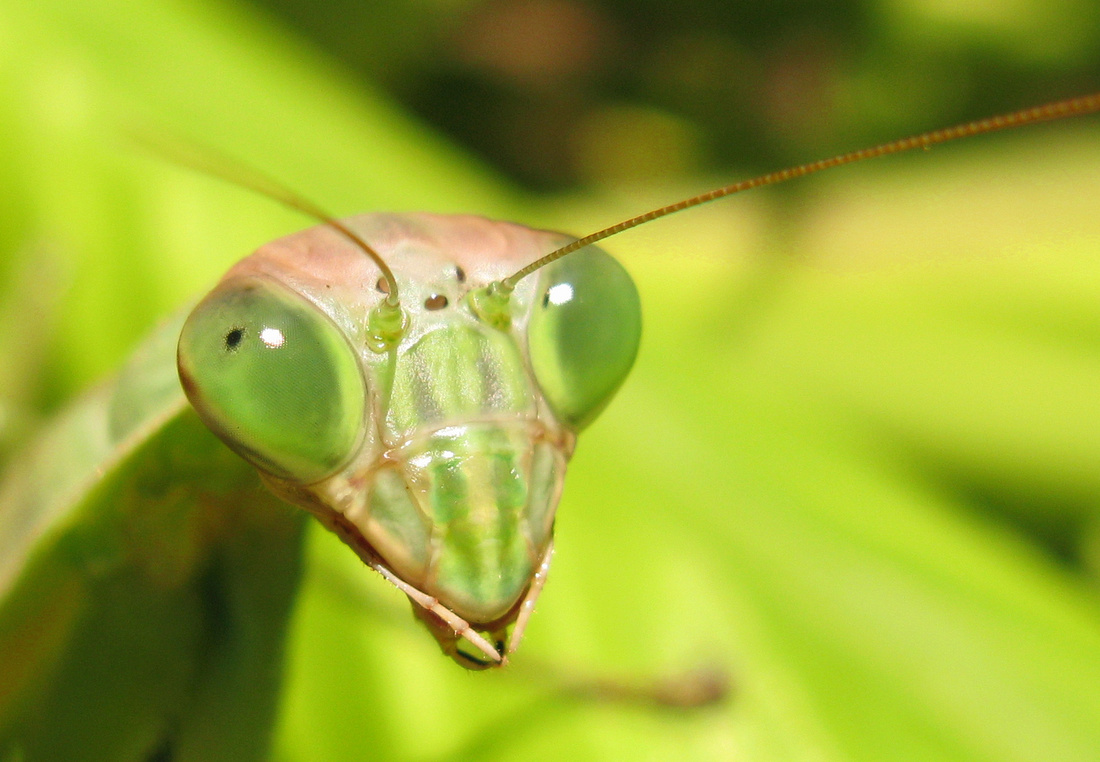 How would you like to be eaten by that!!

Beautiful though aren't they?

The 3 bumps on the top of her head are extra eyes called ocelli. An oculus (singular) is a simple eye for detecting light. If a bird swoops down on a mantis they'll see a shadow and have time to run or jump.

Maybe that's how they find my camera so easily!!