Spring is a busy time for nature lovers and photographers in nsects and frogs emerge, flowers start blooming, breeding birds arrive after spending winter further south, and farmers start preparing the rice fields. Everything changes rapidly and one has to decide where to focus their attention, otherwise everything passes in a blur. This year I chose to focus on observing snakes and a few specific bird species, and to get some better landscape photos of the Spring Rice fields here in . Over the next 4 blog entries I’ll share some of those images. 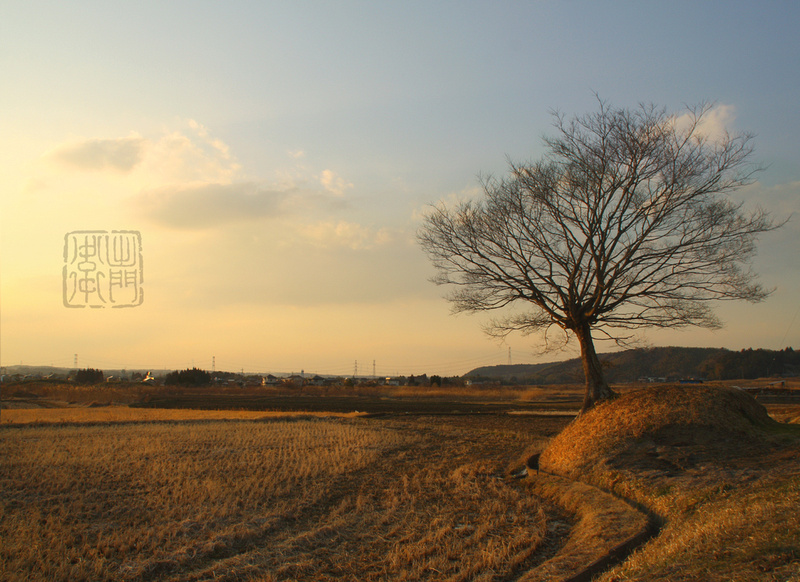 The End of Winter

Japanese rice varieties (Japonica Rice) need a minimum temperature of about 20 degrees celsius to grow, so rice paddies are left dormant over the winter months. Farmers start preparing their tanbo (rice paddies) at the end of Winter, when the frosts are still heavy but the longer sunshine hours have thawed out the soil (photo above). They dry-plough the paddies and then flood them with water and plough them again several times until the mud is fine and soft and the weeds have gone. These days, tanbo are worked with tractors so one farmer can plough several tanbo in a day. 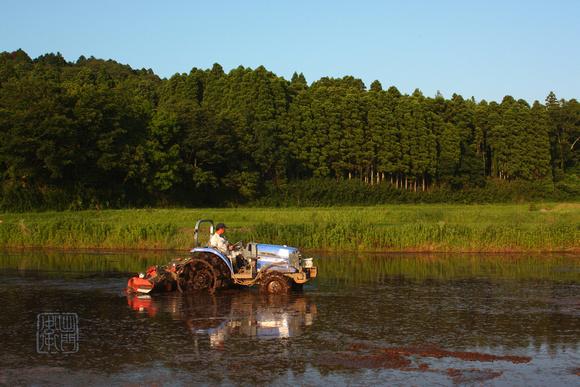 After ploughing, farmers remake the Aze, the mud walls that keep the water in the paddies. Aze (photo below) are about 30cm high and are simply made by packing wet mud up into a mound with a spade to form a wall, or these days automatically with a tractor attachment. The aze are soft at first but after a few days they dry out, and after a few weeks when weeds start growing on them they are strong enough to walk on. 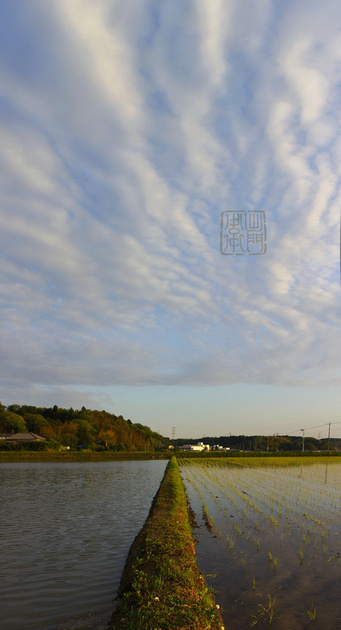 The paddies are left like that, while the farmers wait for the weather to warm up so they can start planting the rice. During that break, the mud settles to the bottom of the tanbo. The water becomes clear and still, making incredibly beautiful reflections on windless days. It was those reflections that I was hoping to capture this year, but while doing so I also ended up with some interesting images of ploughing and rice sowing scenes as well. 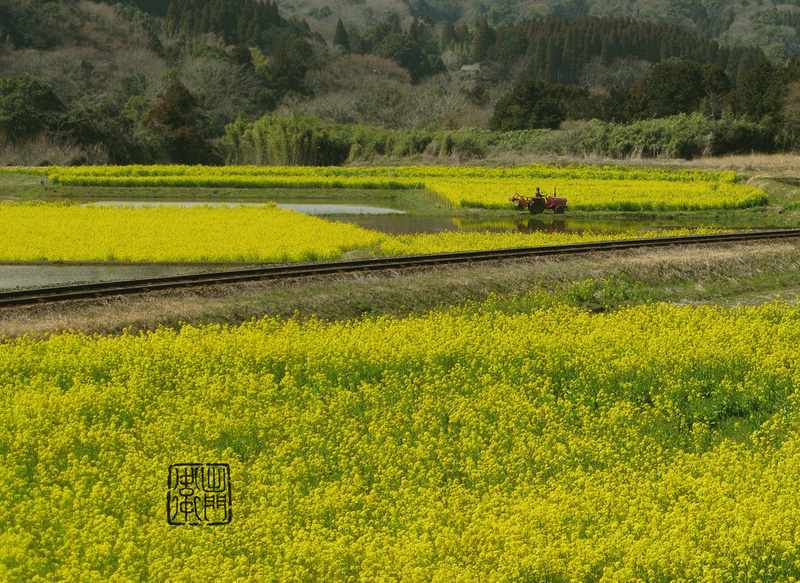 Tractor driving through a field of flowers

Since I ended up with so many photos of different stages of tanbo preparation, rather than put them all in one blog post, I will split them up into four blog posts. Today is the first part, rice field preparation. My favourite shot is the one at the top of this page, a huge sunset panorama of wet tanbo. The clouds in behind the hills in the distance were stunning, and I love the tractor tracks in the mud. That’s a massive photo, more than a metre wide. Here’s another sunset shot with tractor tracks in mud in a small Japanese village. 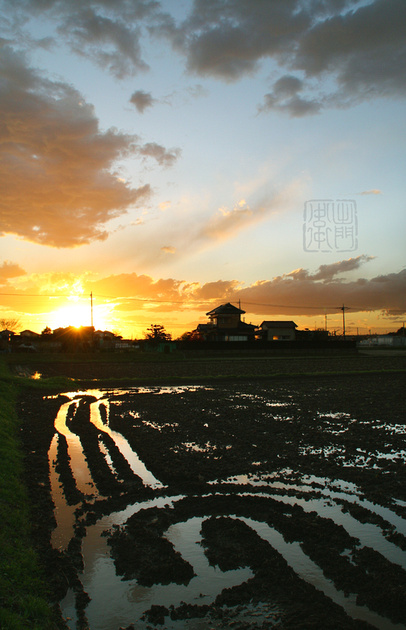 Japanese rice farms are very small in scale, having a rice paddy in is kind of like having a vegetable garden in the West. The average farmer owns just 1 hectare of farmland, and so most of them only farm part time. The part time “farmers” are usually in their 60’s or 70’s, and they just make the rice for their family and friends and to keep the tradition going. Some of them farm on weekends, some of them work together with neighbours, and some of them take turns at farming the tanbo that have been in their families for centuries. Here is a family tanbo in front of an old Japanese farm house. It was at the end of a long a narrow valley which are common here in . The farmer had ploughed it weeks earlier and the weeds had started to sprout up in the paddy. It will need to be ploughed again once more before planting, but it’s much easier the second time.

Spring at the Minka

There are some full time farmers. They make rice to sell to people in the cities. They often rent tanbo off others and farm a bigger area. These farmers are younger, fitter, have more time and better machinery, and usually finish preparing their rice paddies well before the part time farmers do. They often combine the smaller tanbo to make larger ones like this one, which I captured just as a rain storm was coming through as a farmer was rushing to get the last part ploughed before the rain came. 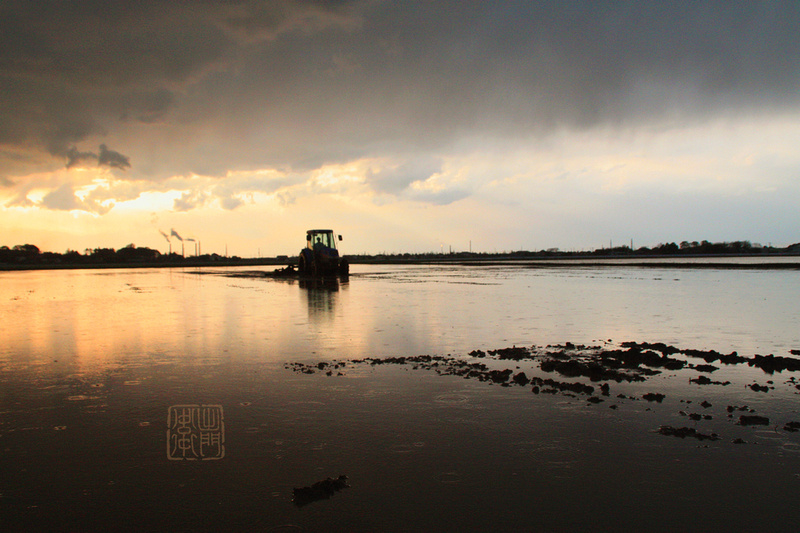 Some of the weekend farmers though, struggle to get their tanbo ready for the warm weather, and in some cases don’t even end up finishing the ploughing and have to give up for the year. So at any one time in just a small area, there are rice paddies in all the different stages of preparation.

Last shot for today is a muddy tanbo and a double road tunnel. Who would ever have thought that mud and road tunnels could be beautiful?