One man's pest is another man's treasure.

It’s been a busy couple of weeks for me and my family, moving house which is an adventure and uploading more photos to my homepage etc. I've also been working on a few small jobs in between, including a few for some nonprofit organisations, which I'd like to tell you a bit about this week because I don’t have a hard drive to show you any other photos from (It’s in a box somewhere with all our furniture and other junk!).

I’m still setting up my website and so haven’t started selling images officially yet (coming soon!) but I have sold some images privately and do get a few inquiries regularly. My policy when people ask to use my photos is simple, if it's an NPO and they have a purpose that I agree with then I will give them use of the requested image for free and help out where I can with editing etc.

This photo request was a surprise though. I was contacted by an Australian government initiative called "The Australian Invasive Animals CRC" who wanted to use one of my nature photos for a smart phone app they were creating about invasive fish species. I was surprised because the image they wanted to use was a photo I had taken of a local Japanese fish species that is threatened here in its homeland, not something I think of as being a pest! I thought they had made a mistake, but when I Googled it, sure enough, my innocent little fish friend is an invasive species over in Aussie! It was sold there as an aquarium fish, and has been accidentally released into streams over there where it is causing havoc among the local native fish.

Being from New Zealand, I know all about the damage that introduced species can do to the environment, and how important it is to get the general public involved in the fight against pests. So it sounds like a good cause to me. I’ve sent them the image they wanted, and it will be used in an app that will come out later this year. In the meantime, check out their homepage here:

Here’s the photo that they asked for. The fish is a Weather-Loach, called dojyo in Japanese (this is a subspecies called shima dojyo). Loaches are about 10cm long and live on the bottom of streams and ponds where they burrow into the shingle and sift through the fine particles to find a meal. There are a few species of weather loaches, this particular one only lives in clear water, and I took this photo the first time I found this species. I caught the fish and transferred it to a small glass jar and took the photo from the outside. It’s a great way to view and photograph water life without harming them, and children enjoy it too. Works with fish, shrimps, crabs, nymphs, tadpoles etc, you can even buy specially made containers for it. Loaches are funny little fish, they wriggle around in the mud like eels and are very sensitive to vibrations. If you walk up close to a rice paddy and stomp your foot, you will often see loaches jumping around in the mud. They probably developed this behaviour to escape from herons and other birds that patrol the rice paddies looking for a wriggly snack! My wife has 2 pet loaches (a different species). They are highly sensitive to earthquakes, and swim around at lightning speed even in the smallest of quakes. In the months after the big Tohoku earthquake they went crazy with all the aftershocks.

Loaches can sometimes be found in supermarkets in Japan too, used in a traditional meal called Dojyo-Nabe. And the fish came into popularity for a while when Noda was prime minister.

And here’s another image that I took in a container. This is a Japanese Freshwater Crab (sawagani). These small crabs are about 3-4cm, and range in colour from blue, green, orange and brown depending on the length of time since they last molted. 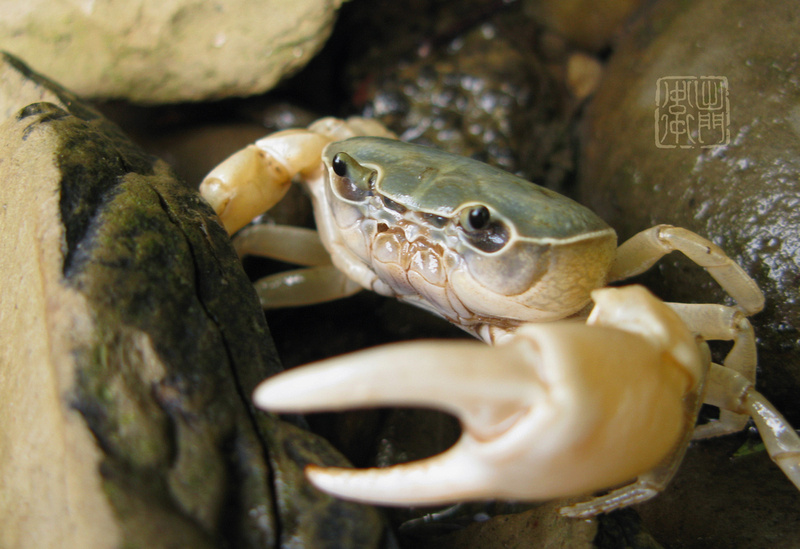 Both Sawagani-Crabs, and Shima-Dojyo-Loaches need clean water, and are a very good indicator of a good aquatic environment.

They are intolerant to pollutants and chemicals, so finding them is always brings a smile!