日本語版はこちらです。Japanese version of this blog is here.
A pleasant surprise I had while strolling along a woodland track the other day. As I rounded a bend and into the low winter sunshine, I noticed a shiny black object on the ground about 5 metres away sticking out like a sore thumb against the light coloured dirt and leaves of the forest floor. It was a stag beetle! And to my amazement it was alive and healthy, even though we are in the middle of January here right now. 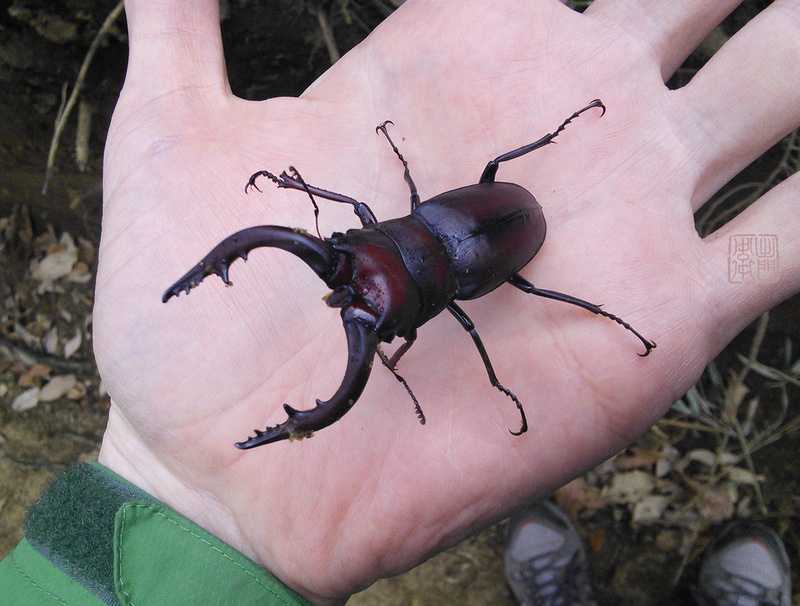 The beetle I found.

It was a male Nokogiri Stag Beetle (ノコギリクワガタ), a well known beetle in Japan, but like most other insects they are usually only seen in summer. Stag beetles emerge as adults in summer, breed and lay eggs then die, usually well before Autumn. They exist as adults only for a few months, taking advantage of the hot humid months.
So why was this beetle here, and more interestingly how had it survived this far into the winter?

What made it all the more hard to believe, was that this beetle was shiny and smooth, an indication that it had only recently emerged from the pupal stage. Beetles are smooth and shiny when they first morph but after a few weeks of flying around, the shine soon disappears, and they commonly have a few limbs missing or scratches from sparing with other beetles. So my immediate thought was that this stag beetle had emerged from the ground at the wrong time of year, confusing winter with summer.

This mistake is quite common in the plant world, but seeing summer insects in winter is a rarity, they don’t last long in the cold, and if even if they could hungry birds would soon gobble them up before we had a chance to see them as birds are always short on food in the winter. I suspected that this beetle was just one of nature's mistakes and so after taking some photos and admiring its aesthetic curves and lines, I placed it under a nearby log in a small hollow similar to those where I have seen stag beetles in the summer and then continued along the track under the golden winter sunshine. 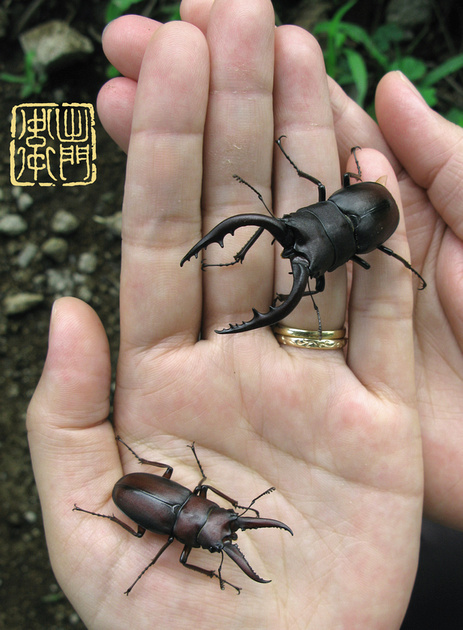 A better photo of some stag beetles showing their enormous jaws. These two were found on an oak tree in summer. The top one is a standard male, the bottom one is also a male, but would have been undernourished when it was a larva so hasn't developed properly. It is smaller and has shorter jaws. The use the jaws to wrestle each other, much like deer do, hence the name Stag Beetles of course.

On returning home though, I did some research and found out that this beetle was a special one. The beetle I found was what is known in the insect world as an “overwinter” beetle and although it is very rare to see one, they are probably not uncommon. Most stag beetles lay eggs and die before winter, but a very small percentage emerge just before autumn and instead of crawling out from the ground they go straight into semi hibernation, hiding in a log or just below the surface through the winter months in adult form. These winter beetles are seldom seen and so were only recently known to science. It used to be thought that all the adults died before winter. From an evolutionary perspective, it makes sense that some of them overwinter as adults because diversifying increases chances of a species surviving. 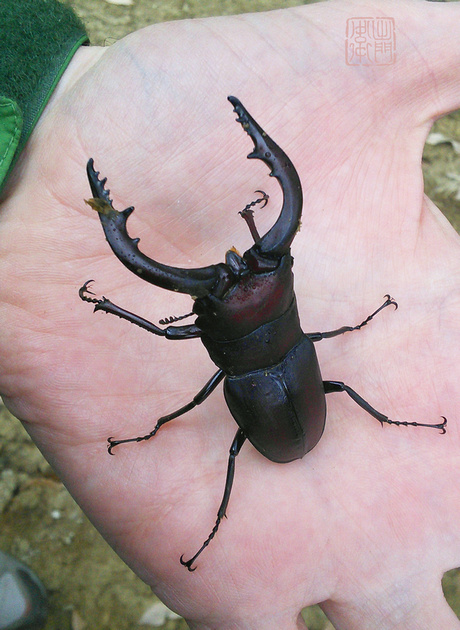 Upon reading this I remembered that some of the leaves and soil close to where I had found the beetle had been disturbed, probably by a wild boar or a human digging for wild yams (yama imo 山芋). I guess this beetle had been over wintering in the soft soil and leaf litter of the forest floor, only to be woken up when it was disturbed. Unlucky for the beetle, but ever so lucky for me!

Thank you for reading my blog and viewing my photos.
Your support motivates me to keep taking photos.
My blog is registered to a ranking website, clicking this vote button regularly gives me votes and helps me get noticed. Please give it a click each time you come here. Arigatou!