Caught in a Summer Downpour

One of the first things I noticed when walking down the main street of Minakami, a small riverside village in the mountains of Gunma, was a huge pine tree growing high up on the hills behind the town centre. It was taller than all the other trees and looked like it had been there for thousands of years. It had that classic pine tree shape, that bonsai look that we all recognise as one of the symbols of .

It was a Japanese Red Pine (akamatsu), and I knew it would make a magic photo on the right day, but on this hot muggy summer day it had no contrast against the background hills that were all a similar distance away from me and so both looked the same colour. I noticed it again and again as I walked around the town though, but from every angle the light was the same so I didn't even bother pointing my lense at it.

After looking around the town, I had swim in the river and went for a hike downstream. As I was returning from the hike the weather changed and I got caught in a summer downpour. The sky turned black and within seconds I was drenched. I ran for the nearest cover which was a bridge, and sheltering under there I watched the deluge pound the leaves off the bushes, and watched the river quickly turn into a muddy torrent. It was some of the heaviest rain I have ever seen in Japan, and it was hard to believe that I had been swimming in that river just hours earlier. The whole time waiting under the bridge I was thinking about that lone pine tree though. What would that tree look like in this summer downpour?

Maybe when this rain stopped I would be able get a photo of it, maybe it would be sticking out against the background as the rain moved through the valley behind it. But where was it? I couldn't even see the other side of the river though this rain, let alone find the pine tree.

After waiting for more than an hour the rain eased off to a drizzle and I could slowly see the clouds starting to lift. Through the gaps in the mist I saw glimpses of the hills above, but I couldn't see the pine anywhere. I had to try and get back to that town centre, that pine tree was calling me! I got my camera ready, took a few practice shots of the hills above to test the light before wrapping the camera in a towel. With only the lense and the eyepeice uncovered, I stuffed the camera under my Tshirt and made a dash back to the spot where I had seen the tree earlier.

It was a good 10 minute sprint, and preciously holding the camera under my shirt with one hand I was knackered by the time I got to the main street. Sure enough though, when I got there the tree looked stunning!

Just like a Japanese black & white Sumie painting.    The Lone Pine in a Rainstorm.

It was still raining lightly, and it was still really dark, but the rain clouds were moving through fast. Some of them were moving in front of the tree, but most of them were in the valleys behind it blocking out the hills that had been distracting before. Each time the pine tree appeared it was silhouetted against the clouds. I was able to get a few shots before the drizzle started spotting the lense.

Here's a close up of the photo above, you can see the rain falling, painting vertical lines on the foreground trees. 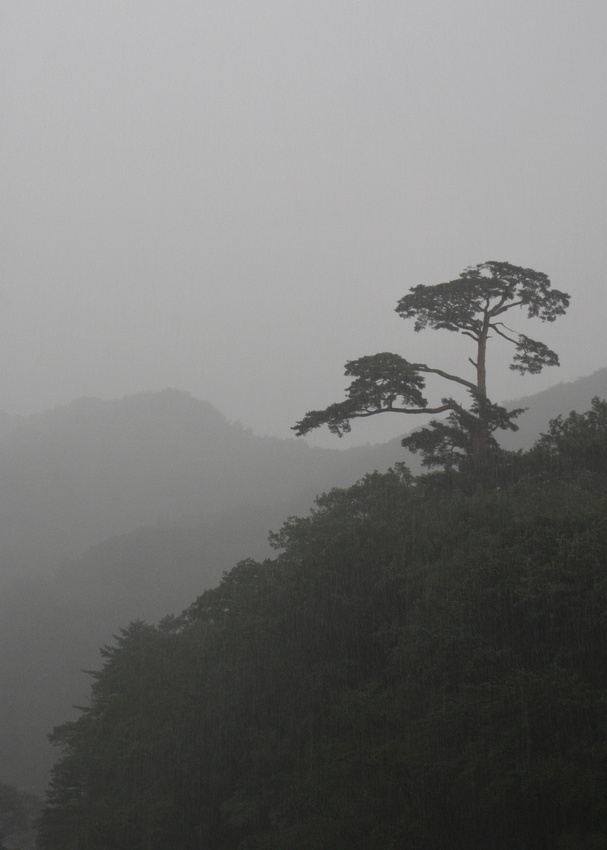 Completely soaked, I headed back to my accommodation. On the way I crossed the river again, and took this photo of it in flood. Put beside a shot I had taken in the same place a few hours earlier it's easy to see how different the river looked now. 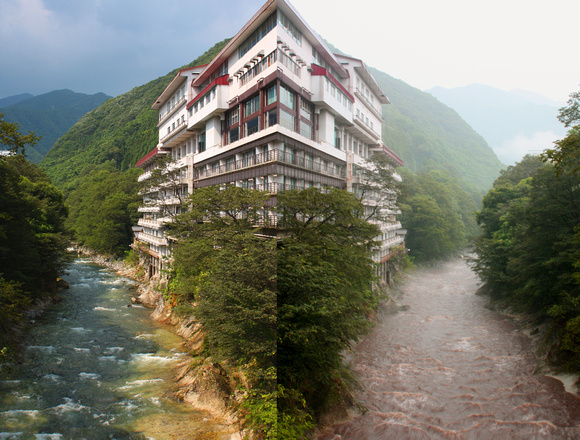 Before and after a Summer downpour

I'll never forget how quickly that river had transformed from a peaceful mountain river, to a dangerous muddy mess. Later that night though, at a cafeteria, some villagers told me summer downpours were common in Minakami, and the river was well known for flash floods.  Funnily enough though, they said they had never noticed the huge pine tree on the hillside above the village, and didn't recognise it when I showed them my photos!

This is another photo of the lone pine tree, with a bit more colour but not quite as moody. 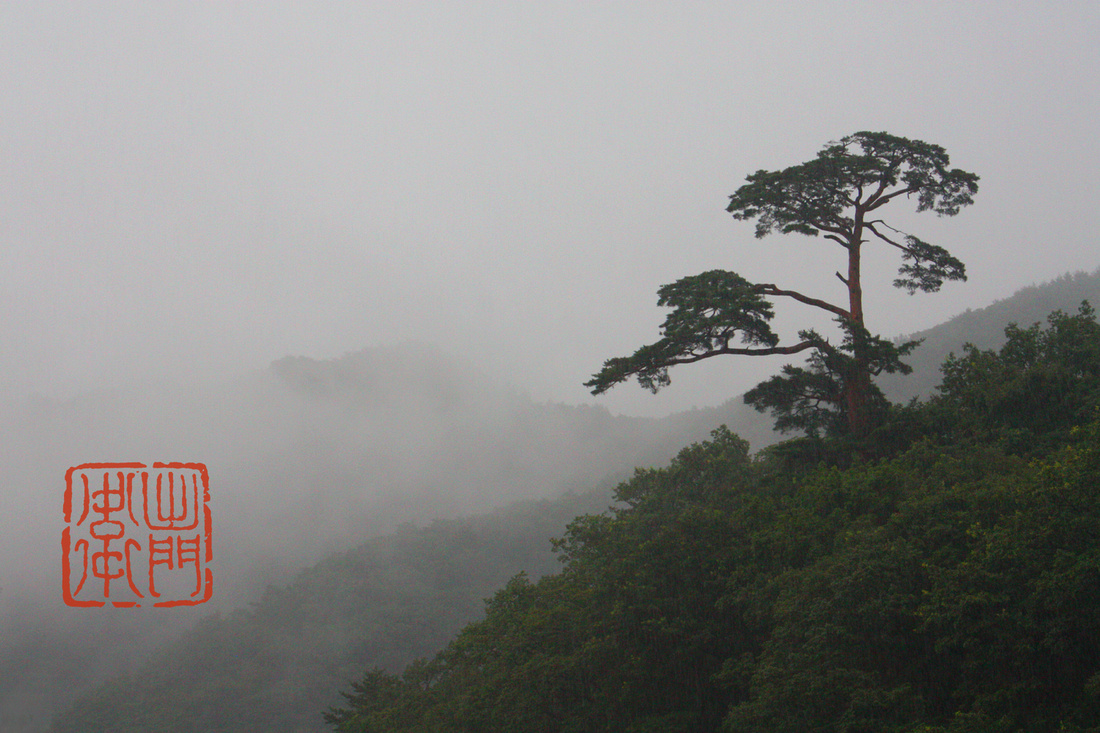 I'll leave you with a photo of a waterfall I took that same day while hiking along the river. 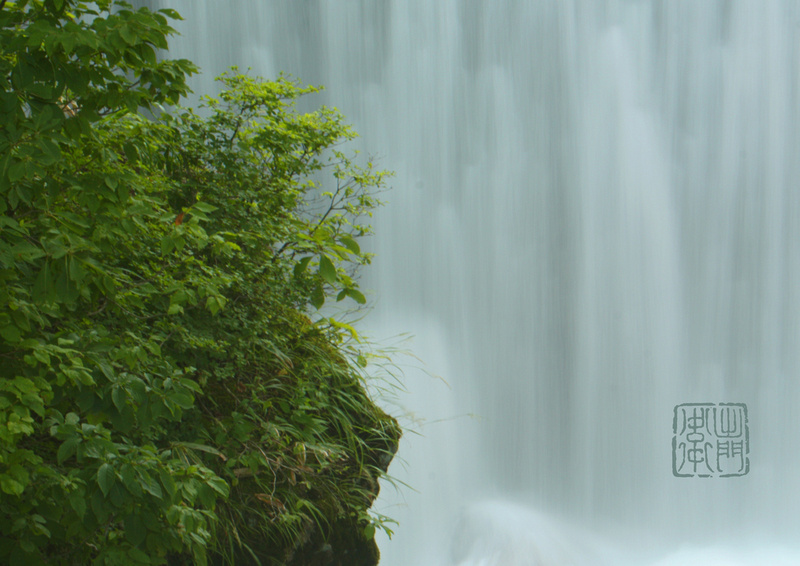 押してね↓   Please click this button to vote for my blog

I'm glad you enjoyed it and thanks for commenting!
There is a story behind everything, and it's the same with photographs. Sometimes they are better left for the imagination, and sometimes the story enhances the picture.
Yes, these ones are much better viewed on a large screen.

Do visit again!
Miguel Arboleda(non-registered)
Loved the story, Damon. I especially like these kinds of narrative of the moment anecdotes.

My favorite photo was actually the last. The hint if color gave it something the others lacked, though perhaps I need to see them all on my large screen monitor first, instead of this iPhone.