Last month I packed my camera gear, hiking boots, binoculars and gas-mask users guide into a pack and caught an overnight ferry to Miyake Island, and active volcanic island about 180km South of Tokyo.

The ferry to Miyakejima takes about 7 hours, and boasts great views of the other islands in the Izu group too.

Miyakejima (三宅島) is the third biggest island in the Izu Islands group, a line of islands that stretches south from Izu peninsula down towards the Bonin islands. Part of the Fuji-Izu-Hakone national park, the islands are also known as the Seven Islands (七島), but there are actually more than a dozen islands in the group. They stick up out of the Pacific ocean along the convergence point of three tectonic plate boundaries, and so have a lot of volcanic activity.

About 800m high and 8km across, Miyake Island has been inhabited for over 1000 years and is currently home to about 3000 people.

The North East side of Miyakejima. Seen from sea, the cone shape of the volcano is obvious.

I visited the island with my brother, who was holidaying in Japan and wanted to go somewhere of the main tourist trail. We choose Miyakejima over the other islands because it only recently re-opened after a large eruption in 2000 forced evacuation of all the residents for 4 years (more about that later). Note: The middle of the island surrounding the volcano is still a no-entry zone and residents are required to carry gas-masks, but locals told me they hadn’t used them for a couple of years now. There are many other things to see on the island besides the volcanic destruction though, for me the highlight was exploring the untouched coastline of course. 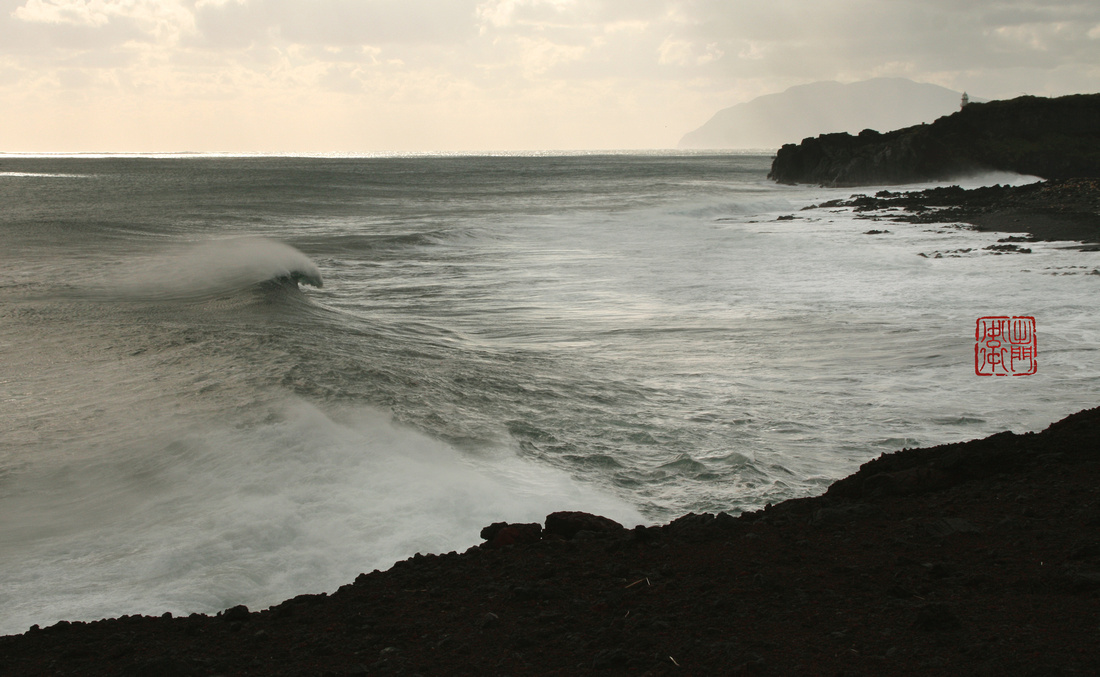 The island is already regaining popularity with tourists and scuba divers in the summer months, but surprisingly in the winter it is dead quiet, even though the climate makes it an ideal winter destination. We spent 6 days on the island hiking, birding, exploring and of course taking photos, and didn’t see any other tourists the whole time.

The ocean currents around Miyakejima keep the climate stable throughout the year, and the air temperature is about 5-10 degrees higher than nearby Tokyo in winter. The Fauna and flora on the island is sub-tropical, and the island is well known for its endemic bird species, many of which share ranges with birds of the tropical Okinawan islands. The sea around the island is clear but the coastline is rugged, mostly formed from volcanic rock and lava flows, some of them recent. 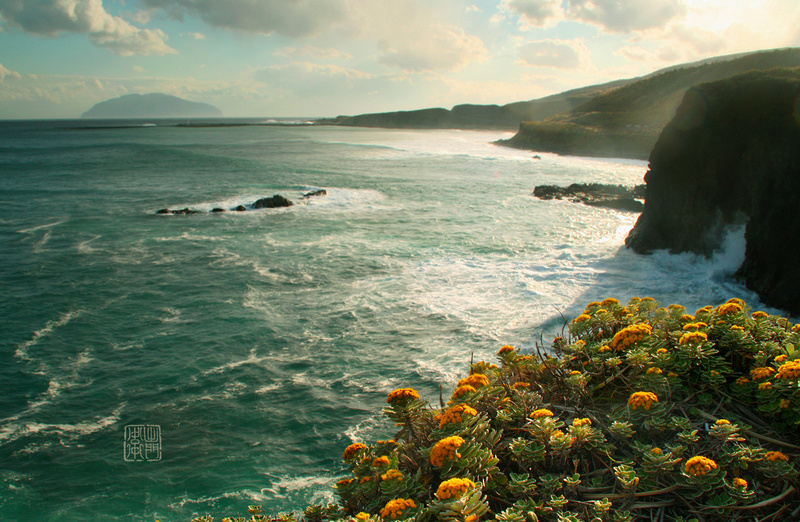 The Miyakejima coastline looking South East. The flowers in the foreground are Pacific Chrysanthemums (Crysanthemum pacificum) a Japanese endemic that were blooming on the cliffs and rocks all around the island when we visited. Where I live in Chiba these flowers stop flowering in early November. This plant, called Isogiku (イソギク) in Japanese, meaning Shore-Daisy, is one example of the many plants that thrive in Miyakejima’s warm climate. The island in the distance is Mikurajima.

Being far away from the mainland means that Miyakejima is blessed with clear night skies free of light polution, but while we were there the weather wasn't very cooperative, so I only got a few photos of the evening stars between the clouds and rain. 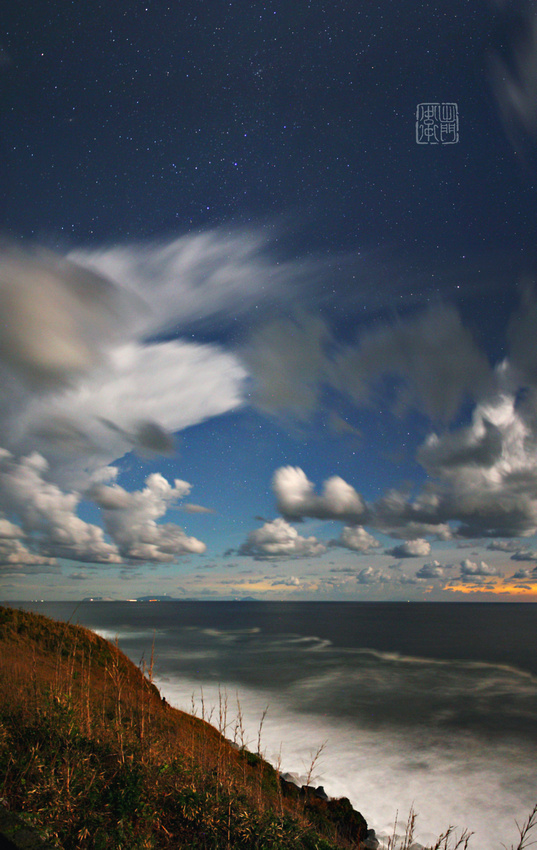 These two photos are long exposures of the night sky on Miyakejima. The orange glow on the horizon is Tokyo in the distance. It was a full moon, which is why the sky looks blue. 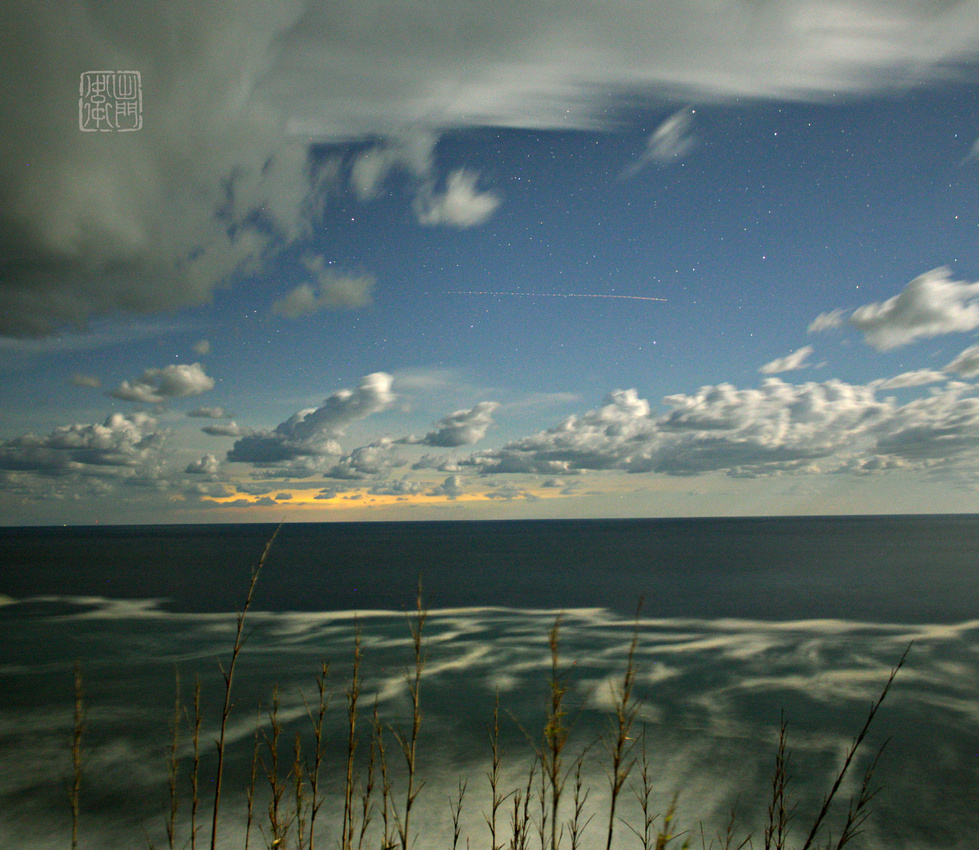 Miyakejima is a beautiful little island well worth visiting. Check it out sometime, and please do me a favour and vote for my photoblog so I can get more views. Just click on the button below once. Thanks for helping me out. 読んでくれてありがとうございます。ブログランキングもやっています↓