Most of the small valleys that I visit don't have names. They are too small and local to need names, and not many people go to them anyway. I'm sure they probably used to have names, but they are disappearing along with the ancient rice farming culture as Japan becomes more westernised.

Quite a few years ago, when my wife and I started exploring the narrow rice-paddy valleys in our area, we realised that we needed to give the valleys individual names, otherwise it was impossible to know which one we were talking about. We started naming them after unique features, or after the nature that we came across when visiting them. "The valley with the haystacks", "Firefly valley", "Valley with the nesting grebes",  "Kingfisher falls valley" etc.

Spring at the Minka

We call this one "Blue Kominka Valley". Kominka means old farmhouse in Japanese.

This system worked so well, that before long we started using it to name forests, rivers, waterfalls, bays and even walking routes. "Forest of the roaring boar" is a lot easier than "Hey you know that forest beside that road near that farm with the houses and that fence with the gate after the school...".

One of our favourite places for swimming here in Chiba, is a small waterfall that we call "Sanko no Taki", which means "Waterfall of 3 lights". It's a beautiful clear waterfall with two deep cool swimming holes, hidden about 30 minutes walk upstream from a more well known spot. 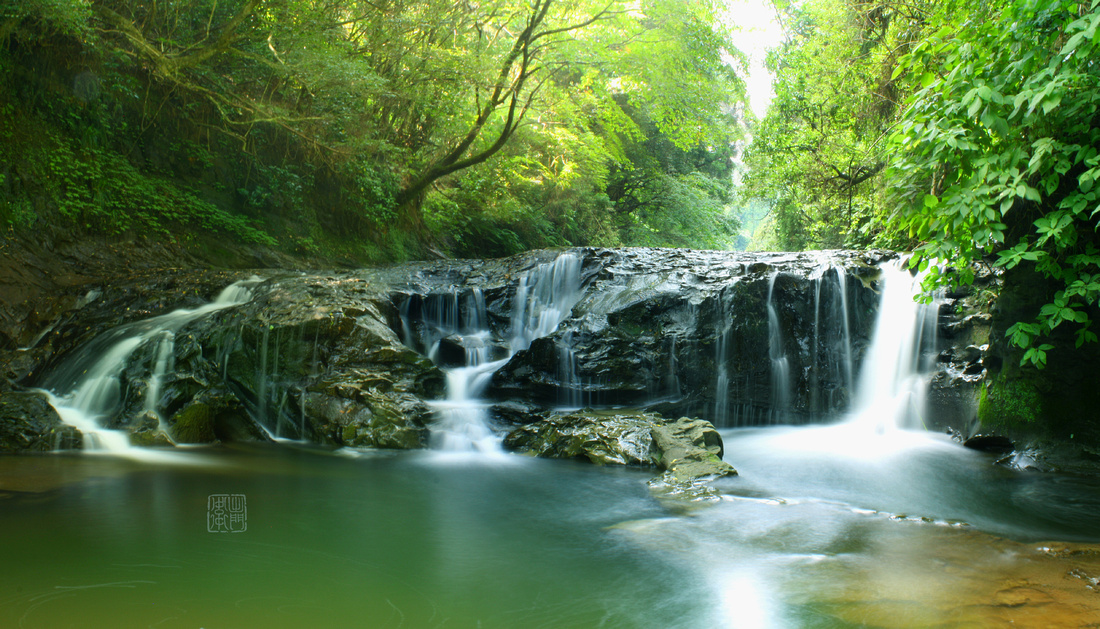 Our private waterfall, we call it 三光の滝. I've never seen anyone else there.

The first time we discovered the stream and waterfall, we heard the most beautiful bird song coming from the trees while we were swimming. Like no other bird we had ever heard before, its whistle-like "hoi, hoi, hoi" echoed off the valley walls for the whole afternoon. Before we left, we climbed up the waterfall and went to look for the bird. 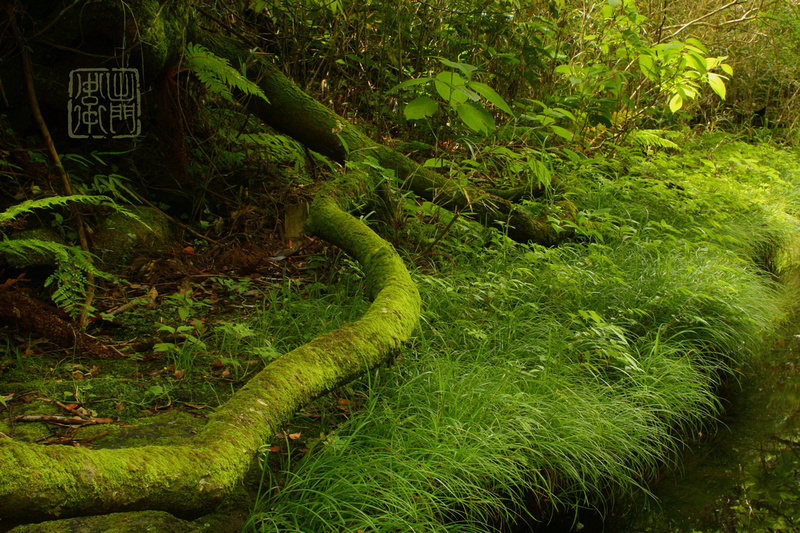 We soon found the bird, and recognised that it was a 'Japanese Paradise Flycatcher', a tropical bird that we had both seen before in books and magazines. It was chasing butterflies and dragonflies along the edges of the water, all the time whistling "hoi, hoi, hoi". We sat down and watched it for a while, catching insects and taking them to a nearby nest that was weaved into some thin branches that hung down over the water. 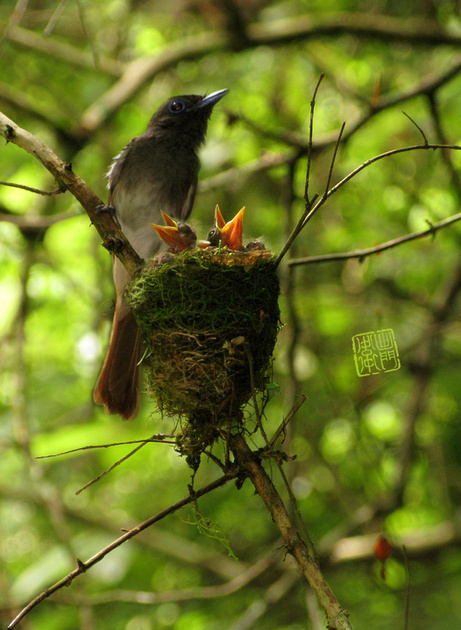 When we got home that night, we read up about the bird, and learnt that its Japanese name sankouchou 三光鳥, means "Bird of Three Lights". The male bird, which we had not seen, has a long tail almost half a metre in length! It has a slightly different song than the call we had heard. The male sings the same "hoi, hoi, hoi", but adds three other notes before them, which to Japanese ears sound like "tsuki, hi, hoshi". The three sounds, mean Moon, Sun and Stars, hence the name "Bird of three lights". 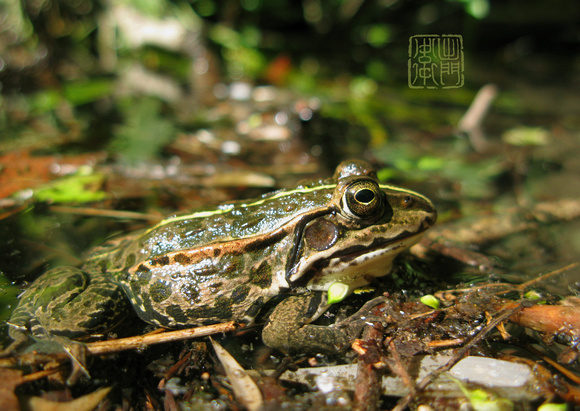 One of the many Daruma-Pond Frogs トウキョウダルマガエル that live above the falls.

They used to be common all over Japan, but are now seldom seen.

Since then we have always referred to the waterfall as the "Waterfall of three lights", which is a perfect description for the falls which have three cascading veils. 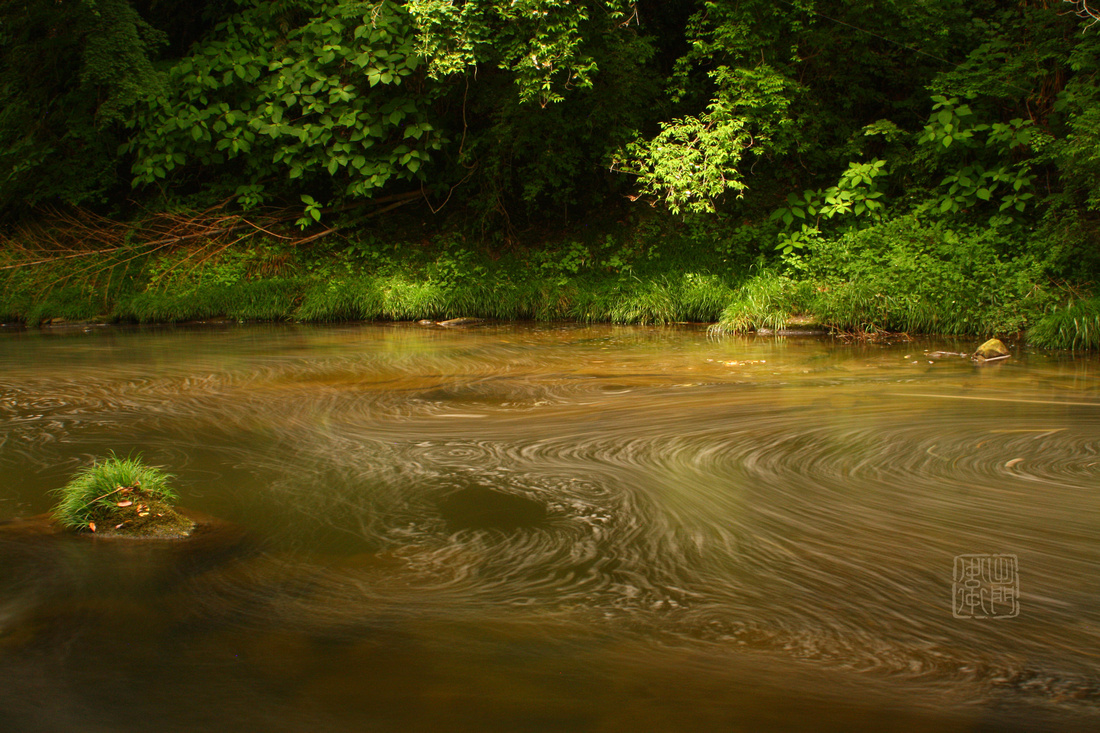 A long exposure shows the peaceful patterns made by currents below the falls.

Last year in early summer, I took my camera to the waterfall and tried to capture some of the beauty of the place. 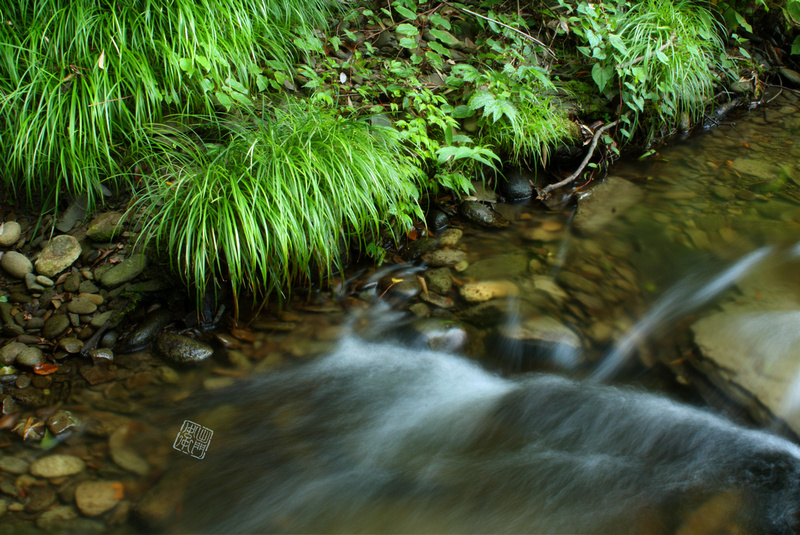 It's a magical little spot, 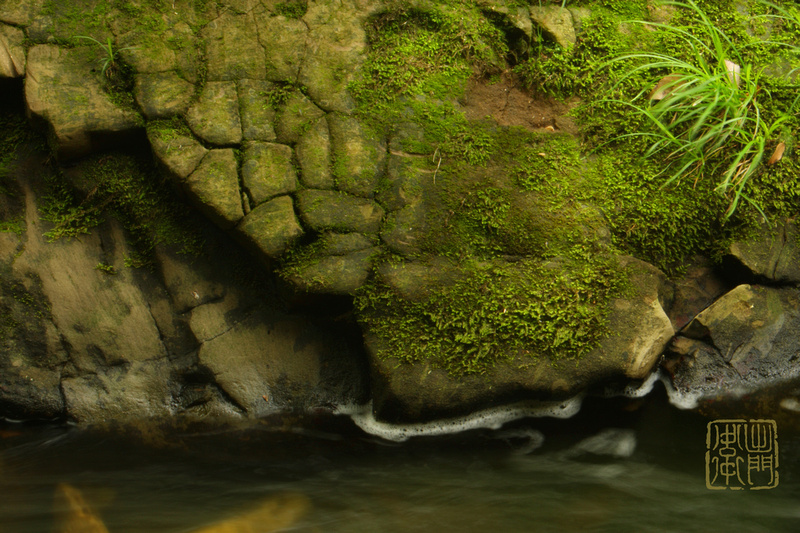 As soon as this winter is over, I know where I'll be heading for my first swim.