In my last blog post I said that I was getting ready for a snowstorm.

Well, the weather forecasters were correct. On Saturday, Tokyo and a large area around it received a great big dumping of snow. 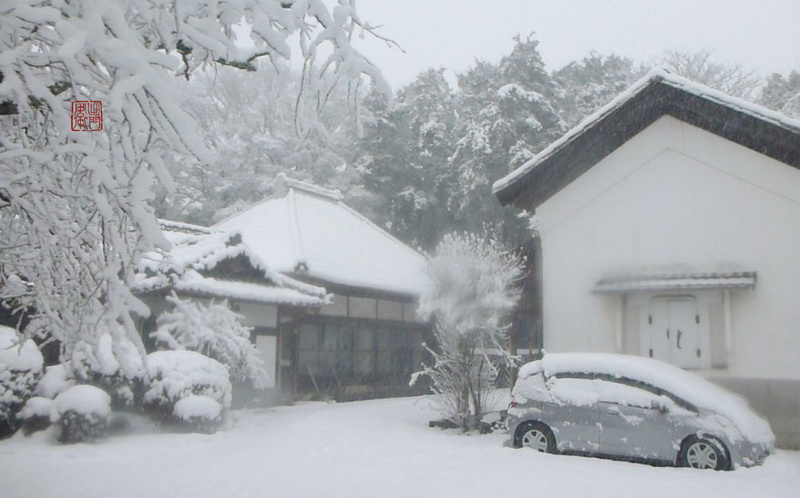 It was a once in twenty year storm for Tokyo, but here in Chiba it broke all past records, and by the time it stopped snowing, there was more than a foot of snow on the ground. Chiba doesn't usually get any snow. It's supposed to be a warm place. 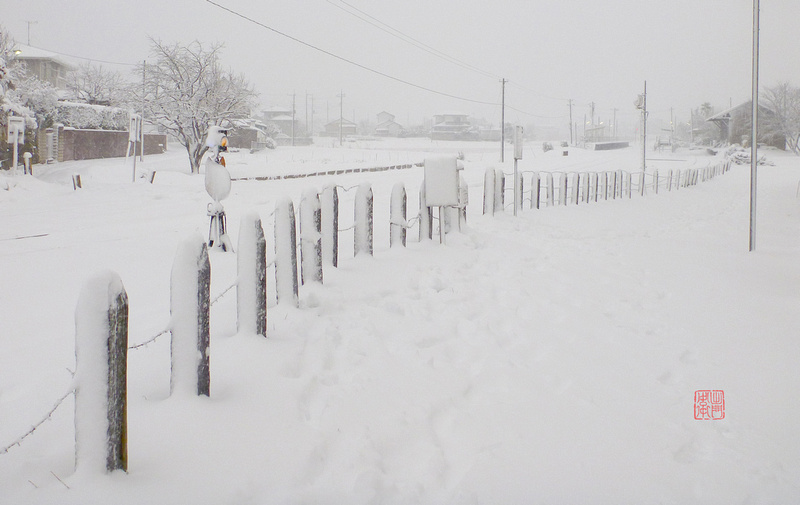 In some places the snow was up over my knees.

When I opened up the bedroom curtains early Saturday morning, the back lawn was already lightly powdered in snow, so I went out for a walk to see how the local wildlife was doing. Out in the rice paddies, the snow was already 5 cm deep, and birds that are usually hard to see like snipe, hawks and pheasants, were already struggling to find cover and food. 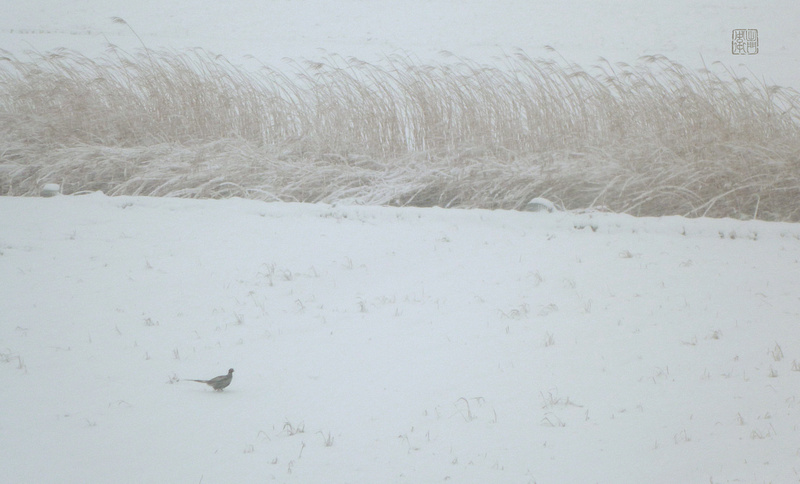 A Japanese Pheasant, looking lost and cold in the blizzard. His camouflage had become useless in the white snow, and he was struggling to find shelter from the chilling wind.

I soon got cold myself, and feeling happy that I had seen more snipe in a few hours than I have probably ever seen, I decided to walk back towards home and see if the wind was more bearable in the tall trees of my local village shrine. The shrine was beautiful as always, and I tried to take some photos of the snow that was fast piling up on the roof. 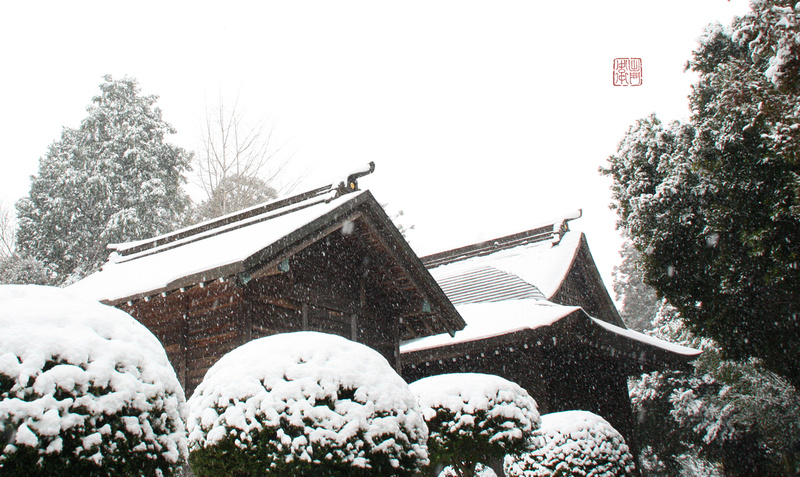 My local shrine at about 10am Saturday. You may remember this same angle from my last blog too.

By this stage the snowstorm had picked up more and I was struggling to use my equipment with my numb fingers. After trying hopelessly to keep snow from blowing into my backpack every time I opened it to take gear out, I called it quits and went back home to dry gear and grab a hot drink.

For the second round, I went light. No tripod, no bags, no lenses, no filters. Just my snow gear, a spare pair of gloves, and a waterproof compact camera. By that stage I knew there was little chance of taking good quality photos, but I still didn't want to miss the snowstorm. As the snow started to pile up on my lawn, it became obvious that it was going to be a heavy snowfall, and I wanted to get out there and enjoy it, and document it for others. 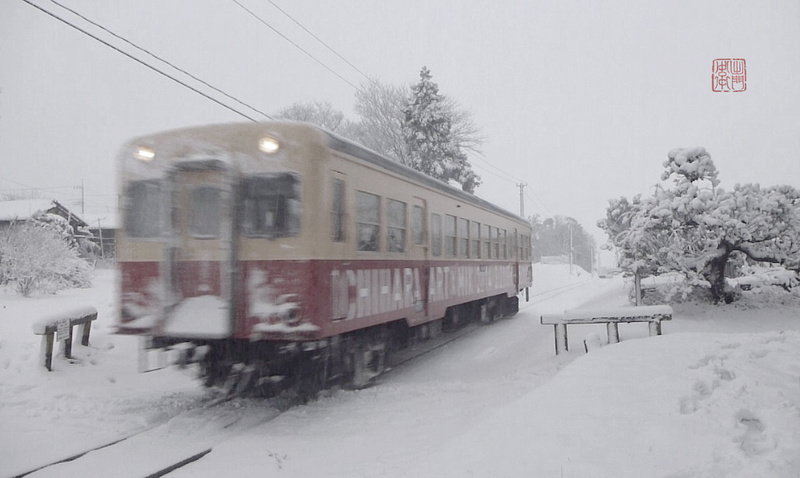 My journey in the blizzard was a random route around the countryside, passing by shrines, farmhouses, and train tracks, trying as much as possible to not walk into the wind. One of the most well known attractions in my town is this small diesel train line that brings a lot of nostalgia to Japanese people who remember when all trains used to look like this. I went to a few places along the tracks that looked picturesque and took a few videos of the train plowing through the snow. This carriage above was the last train that made it through the snow, at about 3:30pm. 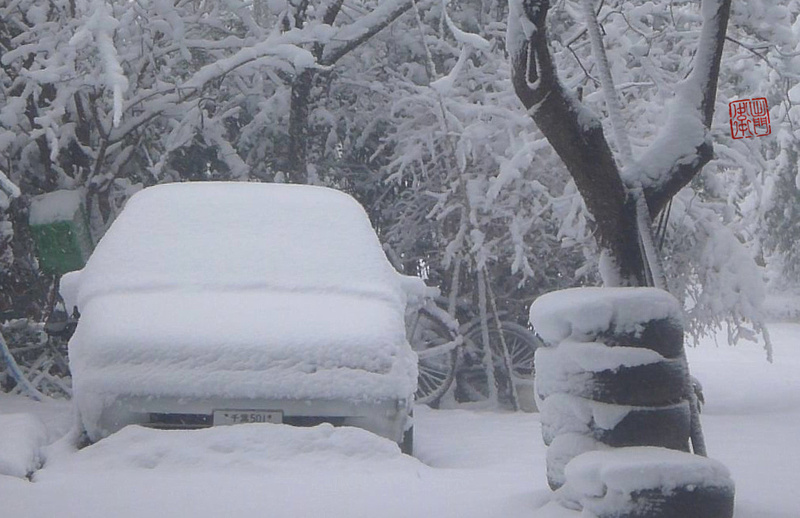 Shuffling through the snow was slow going, and as usual in snowstorms, it becomes hard to find your direction when landmarks are no longer visible. I recognised the stacked tires above straight away, yet many of the places and things I see weekly looked completely different covered in snow. Trees and plants sagged under the weight of the snow, also making familiar places look strange. 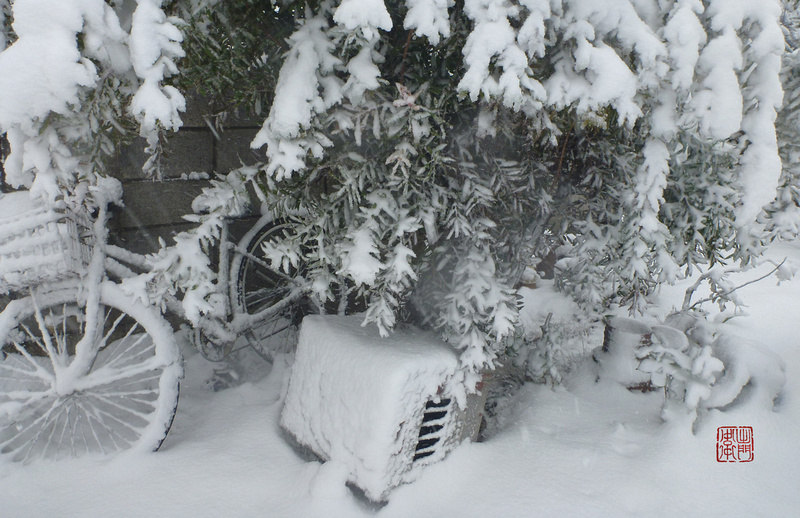 The snow didn't stop the postman from trying to deliver. After watching him get stuck twice, I asked if I could take his photo, and in typical Japanese style he obliged and was kind enough to tell me to be very carefully that I didn't slip myself. 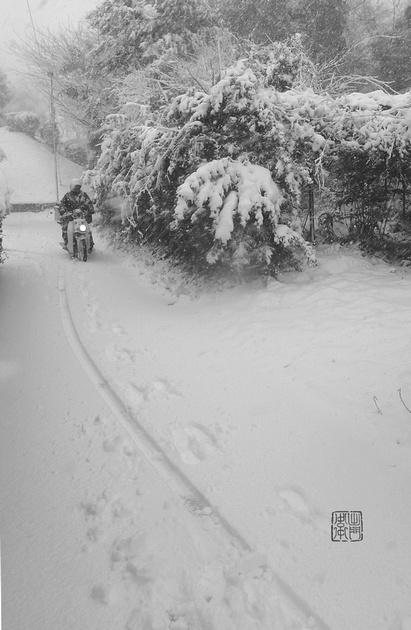 My footsteps, and the postman's tire tracks were the only marks in the snow down most of the narrow streets.

I often chat over the hedge with the owner of this house, but in the snow I could hardly even see his house behind it. His house sits on a hill, and the wind had kept the snow off his roof. 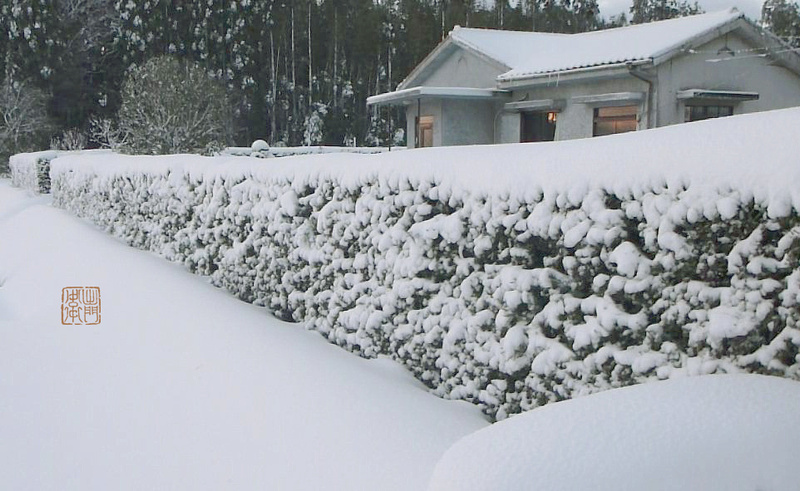 Everything looks beautiful when snow is falling, but I especially enjoyed all the traditional style Japanese countryside houses and gardens. When caked in snow, they loose their colour, and look like they could be 500 years old. 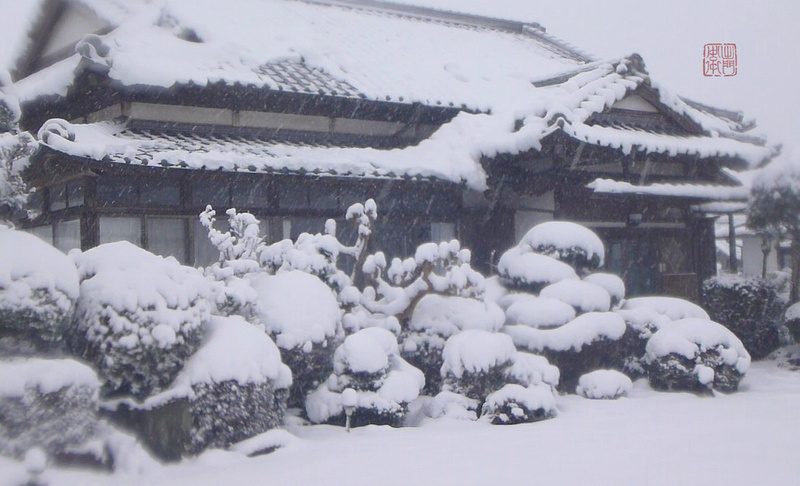 I wonder if the occupants inside enjoyed watching me walking around in the snow too.

Thanks for visiting my blog. Please help me out by voting, just click this button: