Rain always brings them out

We finally had some rain here in Chiba at the weekend, it was long overdue and things were starting to get very dry. Today the ground was still wet underfoot and walking around I saw frogs everywhere. I didn't take any photos, but I have taken plenty in the past so I'll share a few with you and introduce a few of the local species because everyone loves frogs.

Japan has about 43 species of frogs and toad species (they are still classifying some of them so the number changes). Here in Chiba there are 11, a handful of which are really common in the summer. The most well known and frequently seen is the tiny Japanese Tree Frog, called Amagaeru アマガエル in Japanese. I wrote about them in a comical blog post here. 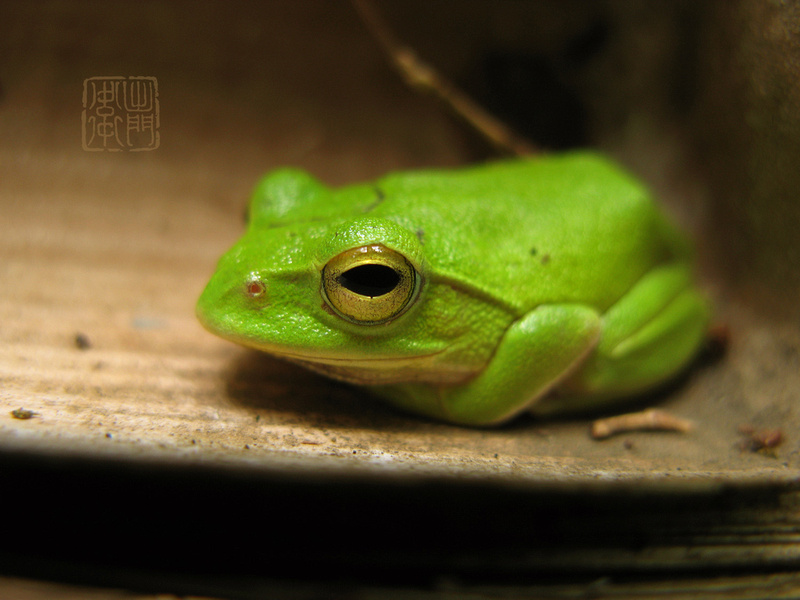 A Schlegel's Green Tree Frog. This female was sleeping in a split piece of bamboo.

Another very common frog that also lays eggs in the rice paddies is the Japanese Brown Frog, Nihon-Akagaeru ニホンアカガエル in Japanese. These frogs live in and around the long grass and trees of the lowlands that surround rice farms. They are incredible jumpers and so are hard to catch, which is probably why they are not so well known. They usually just appear as a blur. There are other brown frogs, and identification can be quite hard, a combination of eye colour and the shape of the stripes on their backs, but if you see a brown frog that takes off really fast when you frighten it, then chances are it's a Japanese Brown Frog. They are a medium sized frog, the newly morphed frogs are a couple of cm long, but a large adult may be 8cm. Brown Frogs have a dark brown triangle patch behind their eyes. 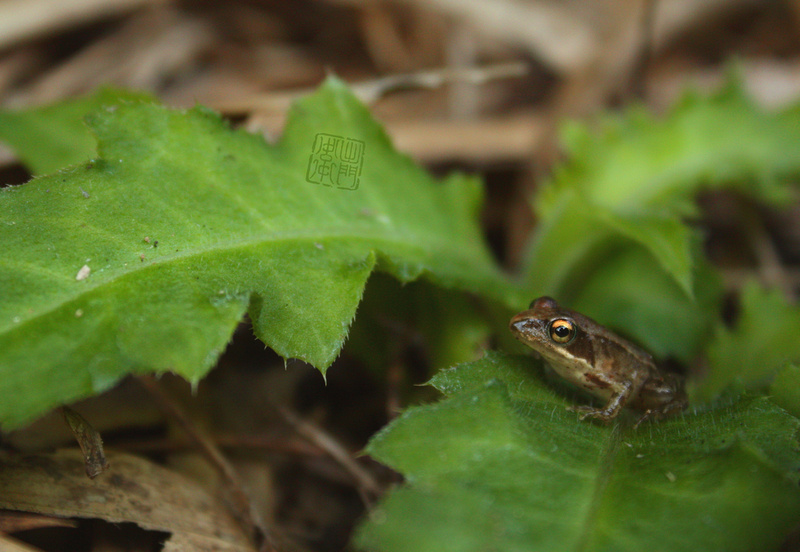 There are 2 other commonly seen frogs, The Wrinkled Frog and the Kajika Frog. Unlike the other common species, these two live close to water, usually rivers or streams. The Kajika frog is a beautiful frog that is endemic to Japan and lives in clear fast flowing streams or rivers. It is a strong swimmer and is well known for its chirpy bird like frog song. The Kajika Frog is called Kajika-Gaeru カジカガエル in Japanese and ranges in colour from muddy grey to dark brown. 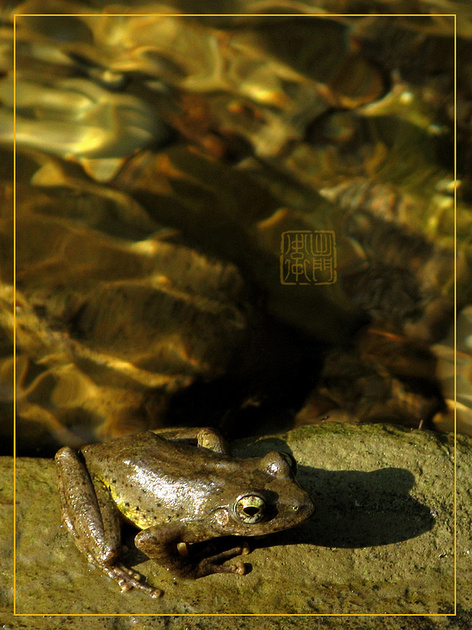 A Kajika Frog. They like to sit on rocks like this, sometimes in the middle of rivers.

The Wrinkled Frog is often seen in similar habitat to the Kajika Frog, but is not nearly as strong a swimmer. They tend to use their camouflage to avoid being caught instead of jumping, and so usually goes unnoticed. Wrinkled Frogs are called Tsuchi-Gaeru in Japanese ツチガエル, and the name wrinkled refers to their skin which is covered in small bumps. Wrinkled frogs are sometimes mistaken for toads because of their bumpy skin, but they are small frogs, growing to about 5cm in length. Wrinkled frogs are unique among Japanese frogs in that some of the tadpoles live through the winter. Most tadpole species cannot survive through the winter. Wrinkled frogs can live in ponds or swamps, and were once common in rice fields which used to be kept flooded over the winter. 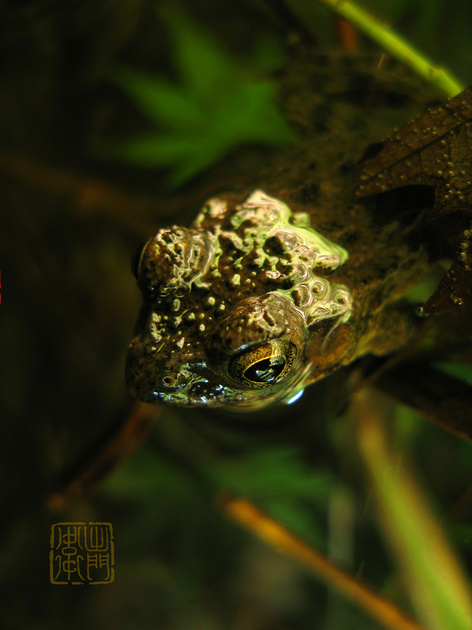 A Wrinkled Frog, floating on the water's surface among some dead leaves.

The last commonly seen species is the Japanese Toad. Called Hiki-Gaeru in Japanese ヒキガエル. Japanese toads are quite habitual, often living in the same hole for years, emerging each night to catch insects, and then climbing back in as the sun comes up, and hibernating there for the Winter. Whereas most frogs go looking for their prey, toads prefer to ambush theirs, sitting still in one spot waiting for a passing beetle or worm. Japanese toads are large, but they are nocturnal and so mostly go unseen. Japanese toads are also known as Gama-Gaeru, and live for about 10 years. There are two main subspecies of Japanese Toad, the Azuma-Hikigaeru アズマヒキガエル is the one found here in the Kanto area. 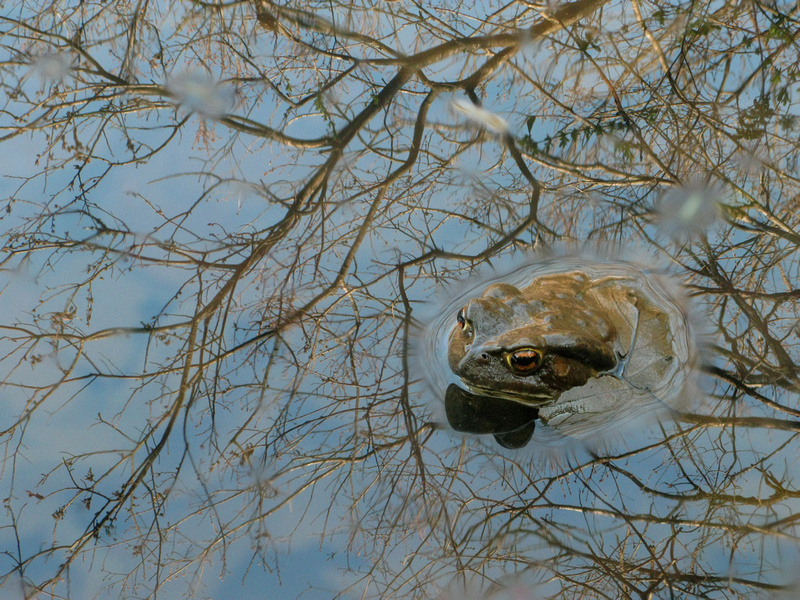 They are a lot bigger than any other frogs but are incredible in that the newly morphed toads are tiny, even smaller than most young frogs! 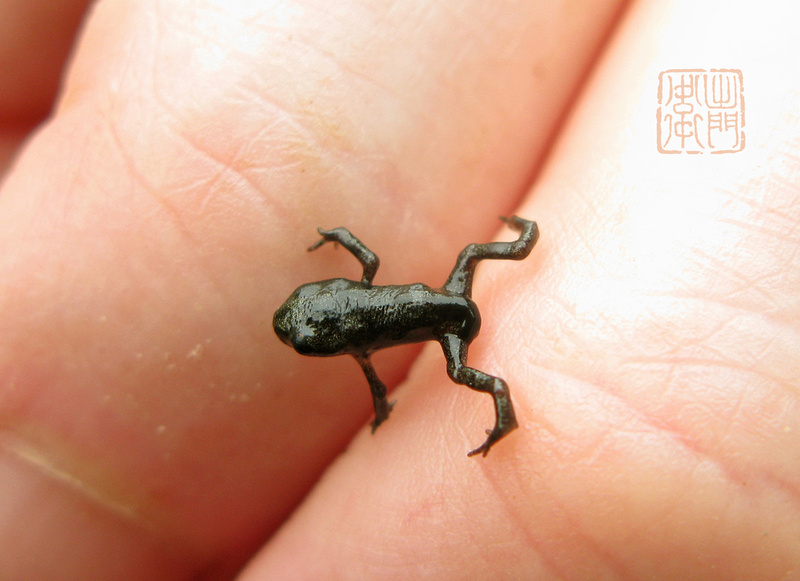 The other frog species are not as common, but here are the names if you are interested in reading more about them (Japanese name in brackets):

Many Japanese frogs are mildly poisonous, so don't touch your eyes after handling them and wash your hands well. There are a couple of months left until frogs will go into hibernation, so enjoy them while you can, it's much more fun if you know a bit about them!