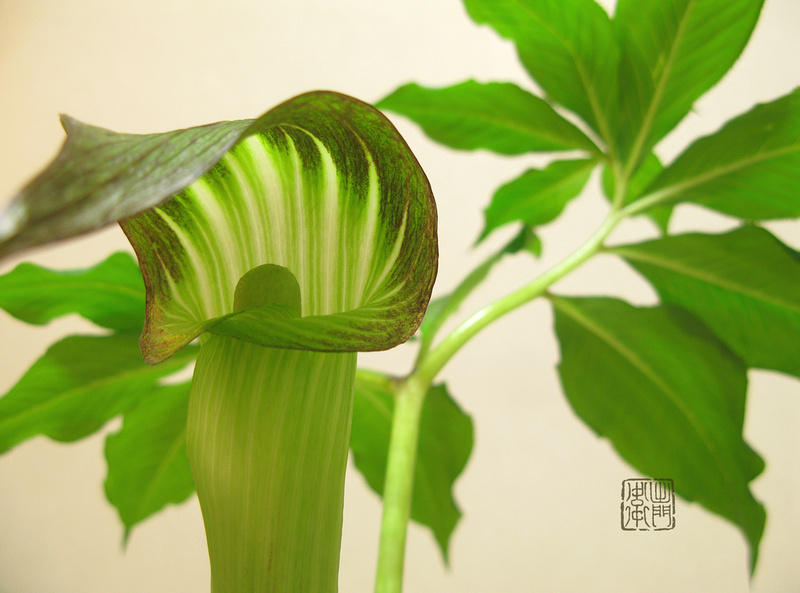 About this time last year, while walking along a narrow forest track I came across a large area where all the plants and top soil had been violently dug up and thrown around. It was obvious from the hoof prints, that this was the work of an Inoshishi, a Japanese creature that comes out in the dark of night when nobody is around.

Inoshishi, Japanese Wild Boar, have an incredible sense of smell, and they use their leather-tough snouts to plow through the soil looking for roots and mushrooms to feast on. Wild boar were once uncommon in Japan, but have made a rapid comeback as hunter numbers have dropped over the last few decades, and the trenches and mounds of dirt the inoshishi leave are a common sight in the Japanese countryside these days.

As I shuffled my way past the Inoshishi mess, I noticed a white golf ball sized object lying on top of the disturbed soil. Could it be!? I thought. Was this the plant bulb? The bulb of the amazing Sex-Switching-Viper-Flower?!?

I picked it up, and carefully inspected it. Yes it was! My jaw dropped.

I had always wanted to grow one of these plants at home, but I didn’t want to dig a wild one up. This one was lying exposed on the ground though, left for dead by heartless mother nature. How could I not save it!?

Thank you wild boar! Oink oink! Now I could finally have my own Sex Switcing Viper Flower!

I took the bulb home and planted it, and sure enough over the next few weeks it grew. That’s how I was able to take this series of 8 photos. 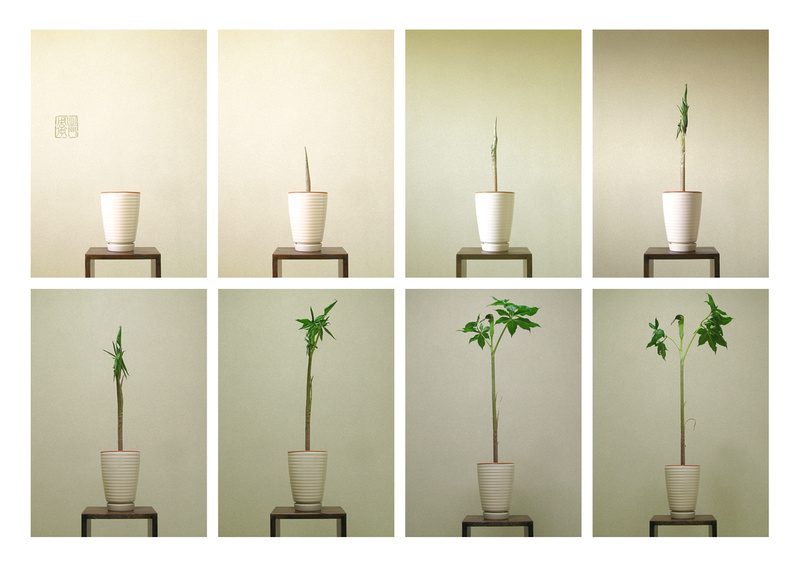 Jack in the Pulpit Timelapse

The common English name for these plants is "Jack-In-The-Pupit”, but like most Japanese plant names, this name is borrowed from a similar looking European plant. The scientific name is Arisaema, or Tennansho テンナンショウ in Japanese. There are a handful of Arisaema that grow in my area, the most common of which is the probably the plant above, called Mamushi-gusa (マムシグサ). Mamushigusa grow on the forest floor of the lower lying mountain areas. 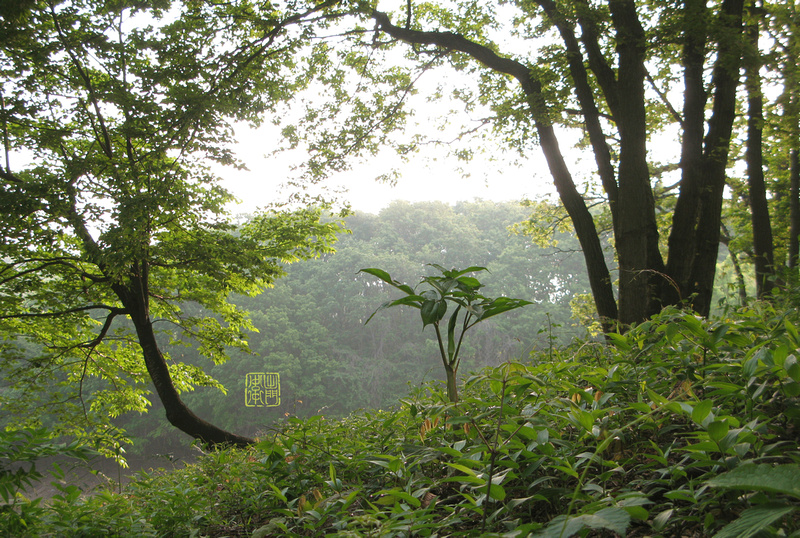 Mamushi-gusa grow tall and fast so in early spring they can get up above the other plants on the forest floor.

Mamushi-gusa, like Daffodils and Tulips, lay dormant over the Winter, keeping their energy stored up in a bulb under the ground. When the soil warms they spring to life and break through the soil. Unlike Tulips and most other perennials though, Mamushi-gusa send out a single large flower and a set of leaves on one tall stem. They grow 40-60cm high, and reaching up from the forest floor they look like a snake, standing up ready to surprise a passing hiker. 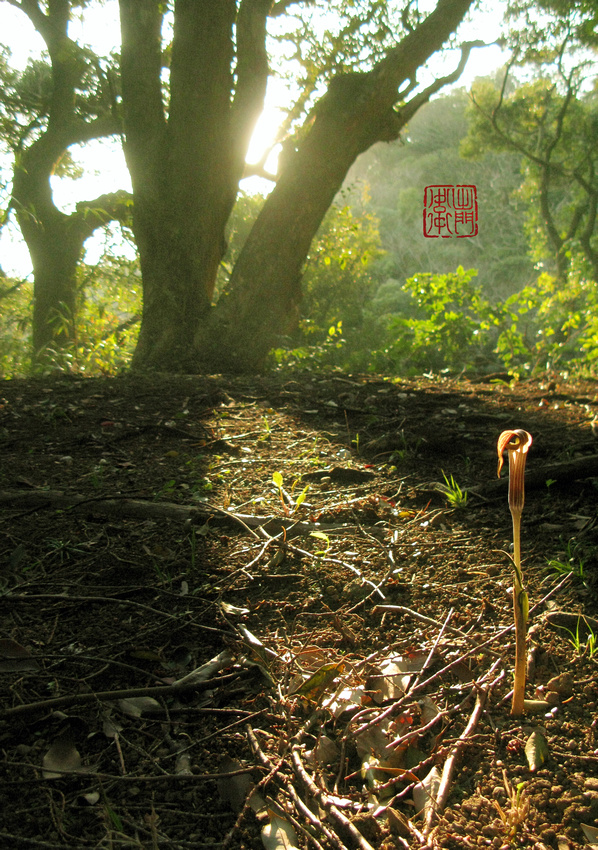 Sometimes they emerge with flower first, sometimes leaves first, but usually together.

Mamushi in fact, is the name of a venomous Japanese snake, called a Pit Viper, and the Japanese name Mamushi-gusa probably came from this resemblance to a striking snake. Gusa means grass or plant. This snake-head shaped vessel is not actually a flower though, it’s a spathe, a large modified leaf that guides insects inside to where the real flowers are (there are actually hundreds of tiny flowers inside). There is another theory for the name origin though. Some people think it could refer to the pattern on the sheath that the stem emerges from, which looks very similar to the mottled skin pattern of a Japanese Pit Viper. 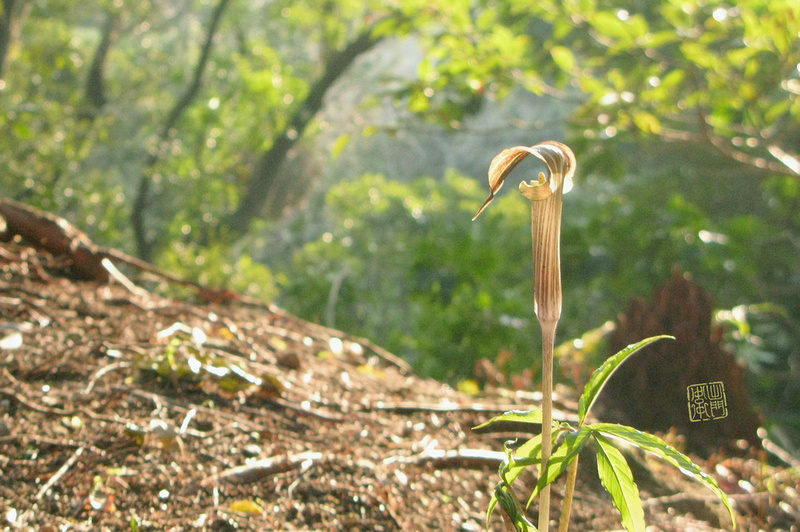 How dare you confuse me with a snake, I'm a Sex Switching Viper Flower!

Mamushi-gusa, which are closely related to Taro potatoes, have another obvious difference from tulips and other garden flowers, as you have probably already noticed, they lack beautiful colours. This is because they rely on flies for pollination. Instead of attracting butterflies and beetles with bright yellows and pinks, they produce a rotten meat smell that attracts tiny flies (Now you know why my timelapse stopped at Day 8 !! On the 9th day it started to smell and I had to put it outside). The flies are drawn down inside the flower by the smell, and brush over the little flowers, picking up all the pollen. 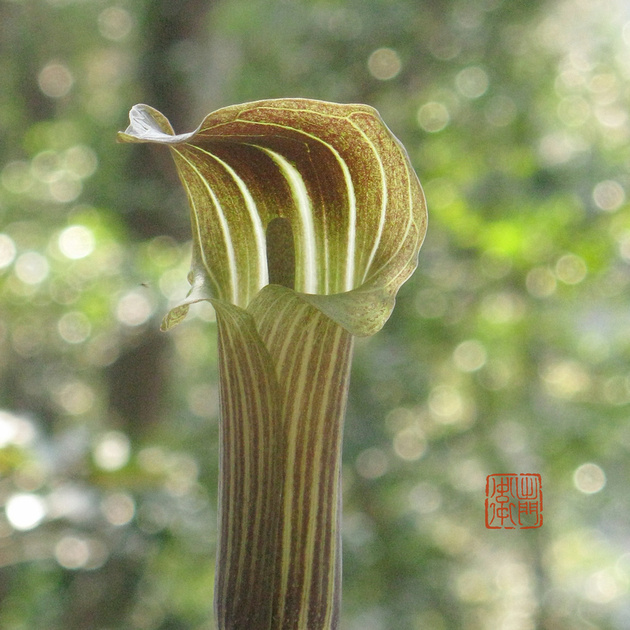 If you look carefully, you can see a tiny fly, just left of the opening.

Now if you’re a gardener, then your curiosity probably stops about there. But if you’re a fascinated by the finer intricacies of nature, then this is where it gets really interesting.
Plant sex is complicated, there are many books dedicated just to plant reproduction. But for sake of simplicity, there are two common plant types:
Dioecious plants are like humans, they have males and females.
Monoecious plants, like corn, have male and female flowers on the same plant. Mamushi-gusa are basically Dioecious, some of them are male, and some of the are female.

Male Mamushi-gusa have a small opening at the bottom of spathe. After walking all over the flowers, the flies eventually find the hole, and are able to escape. The female plants don’t have an opening though, and when flies arrive carrying pollen from a male plant, they walk around frantically, trampling all over the tiny female flowers again and again, ensuring that the plant gets pollinated. In fact, if you open up the spathe on a female plant, you will find dozens of little dead flies inside. How flies benefit from this relationship is not yet known and makes it even more mysterious.

But, what gets botanists really excited about Mamushi-gusa plants is their ability to change sex. The plants, not the botanists! These plants can be male one year, but then next year the could be female. A year later they could be male again. 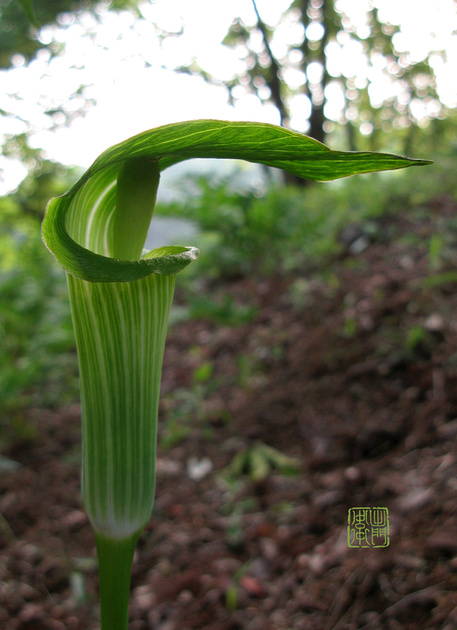 You better marry me soon, because next year I might be the same sex as you!

Recently, Japanese botanists discovered that the sex of Arisaema plants is determined by how much energy it is able to store up in its bulb. This is determined by soil nutrition, moisture, weather etc. Producing seeds takes a lot of energy, so a plant that has a good year has enough fuel to spend on making seeds. But a weaker plant, can’t afford to take that risk and so in spring will emerge as a male plant. Generally the younger plants are all male, and the bigger older plants are female. My plant last year was a female, which makes sense because when I found it, she was a strong and healthy bulb. But last year I kept it in a pot all year, and so this year I am expecting my Sex-Switching-Viper-Flower to emerge as a male. This month I planted it in my garden, and when he gets bigger and switches to a female again, I will dig her up and take her back to the forest where I found her. 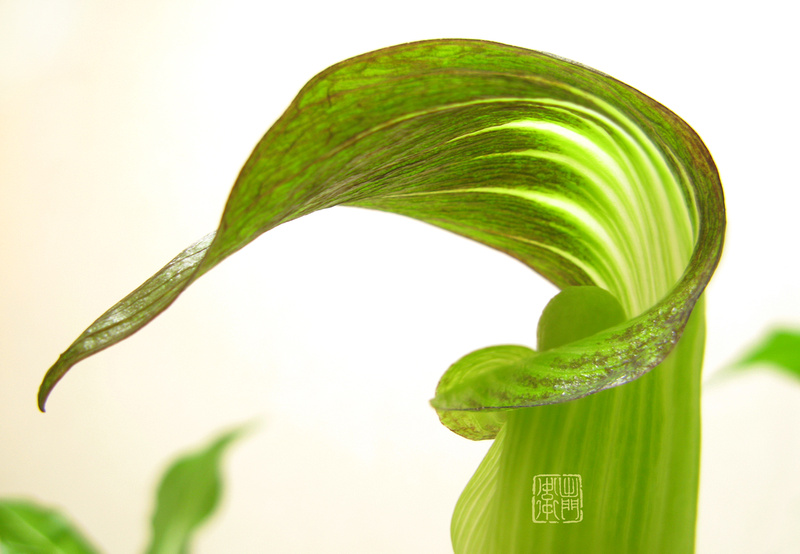 That round thing in the middle is called a spadix, it's a pole covered in tiny flowers. Most plants that have a spadix are monoecious and have male flowers at the top and female flowers down at the bottom. Insects land on the top of the spadix and crawl down over the male flowers before arriving at the female flowers.

Garden lovers shouldn’t overlook Mamushi-Gusa though, because it does also have a beautiful side, it’s seeds. In Autumn when the leaves have died and the spathe begins to wither on the female plants, dozens of bright orange, yellow and red seeds are revealed. By the time the fruit have rippened and the leaves have falles, these colourful seed heads stick out like a sore thumb in a dark winter forest, and winter hikers often notice them. If you do find one, don’t touch it though, all parts of these plants are poisonous and can cause nasty skin rashes and vomiting. That’s probably why the wild boar don’t eat them. 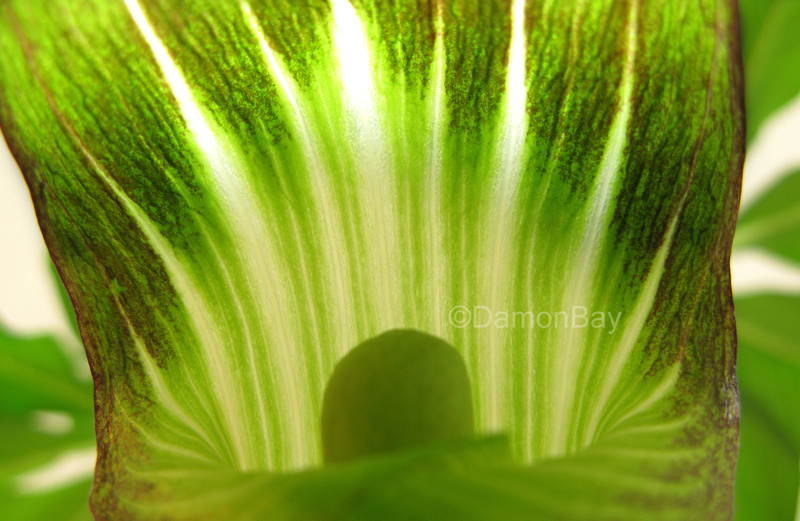 Close up, the spathe is actually quite impressive. You may have to block your nose though.

Another common variety of Jack-In-The-Pulpit is the Urashima-so (ウラシマソウ). This species is more famous, mainly because its Japanese name is easily recognizable. Urashima Taro is the main character of a Japanese fairy tale, who was known for his fishing rod. The Urashima-so plant has a foot long whip like tail that hangs out of the spathe, looking like Urashima Taro’s fishing rod. 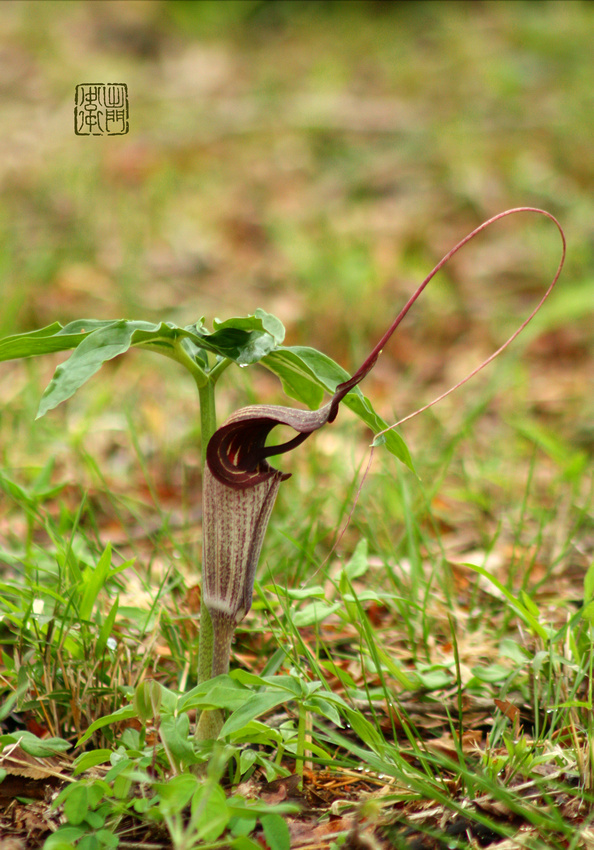 Urashima-so, showing characteristic "fishing rod" with is actually just a really long spadix. Notice the young plants at the base. Arisaema often grow in tight groups. This is because the colourful seed head is picked up by animals and dragged across the forest floor. Where it is dropped (or spat out!) is where the young plants grow.

Both of these species are known as Jack-In-The-Pulpits, but I think my name, Sex Switching Viper Flower, is much more descriptive.