Friday was a hot dry day here in Chiba, it kind of reminded me of New Zealand summer. All day there had been clear blue skies with fast moving clouds, and a workmate and I had talked about how the clouds looked summery.

On the way home from work I stopped off by a spot I've been keeping my eye on recently,hoping that it would have some nice evening sunshine on it to compliment the vivid clouds.

Driving there things looked promising, the sun had sunk down low in the sky and the hills were already taking on an orange tint. But as I turned the last corner some dark black clouds started forming in the western sky, and as I parked my car in a narrow space beside a storage pond, I noticed small spots of rain on the water.

Everyone loves a storm though, especially at the end of a hot day, so I grabbed my umbrella from the back seat and walked down to the spot to see how it looked. In the few minutes that it took me to walk there, the whole sky clouded over and the beautiful light was gone. Through some gaps in the clouds white cumulus clouds were visible way up high above, a clear sign that I was underneath a large storm. There was no thunder, but the rain settled in and the sun was nowhere to be seen. I gave up on the shot for the time being, and figured I had about 40 minutes till sunset so would go for a quick walk to kill time.

10 minutes before sunset it was still raining, but the storm was moving through fast and the sky was clearing from the west, so I got my camera gear out and went back down to the spot. The sun popped out from under the clouds and everything was light again, but there was still drizzle in the air and the glare was blinding. It was stunning light, but sun showers are almost impossible to get a good photos of, especially looking into the sun. There is just too much glare around. 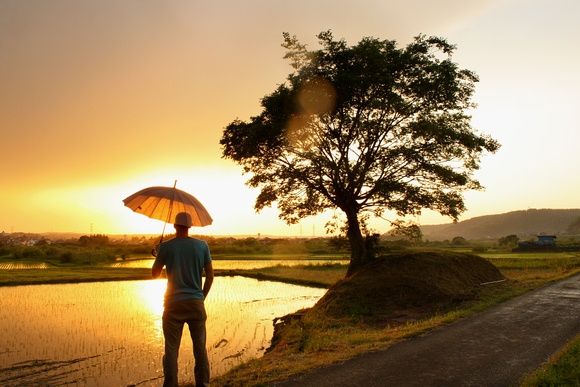 Waiting for the Rain to Clear

A selfie while waiting for the sun to disappear. Clear skies in the east, the passing storm up above. It was a beautiful scene, but too blinding to get a decent photo.

I've been photographing this tree since last summer, it's one of several locations I've been playing around with for some Four-Seasons projects. I've got Summer and Autumn shots of this tree that I'm happy with, and I trekked through snow earlier this year to get the winter shot, but I haven't had any luck with the spring shot so far. The skies have been dull since the rice paddy in front of the tree was filled with water last month.

Having been here numerous times now over the last year, I know this tree like my best friend, but while waiting in the rain for the glare to go away it suddenly occurred to me that I had never taken a close look at it. I had always just assumed it to be a Keyaki tree (Zelkova tree), but pulling a branch down and looking at the leaves I discovered that it is actually an Enoki (Hackberry Tree)!

As you can probably guess by now from the length of this blog post, I eventually got my shot. The storm passed through and the sun went down behind the horizon and took enough of the glare with it to make the scene worth photographing. Not only did I get the spring shot I have been after, but I also came away with a spectacular panorama of the tree. And more importantly, I now actually know what kind of tree it is!

Please help me out by clicking this blog vote button below.